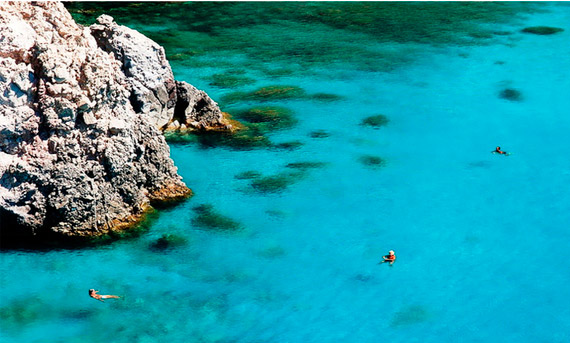 An article that should make every Greek proud was published on the famous website Huffington Post. The article focuses on the Greek islands of Cyclades, saying that they are “basically paradise”.
The website offers 13 reasons why the Greek islands are like heaven. “Paradise isn’t on some far-flung, pricey South Pacific island; actually, it’s in Europe. Greece, to be precise. The Cyclades islands have an amazing mix of culture, history, and cuisine, and a natural beauty to rival any of the world’s exotic island getaways,” noted the article.
According to Huffington Post, the 13 reasons why the Cyclades are paradise are:
1. The hotels are spectacular
“Even if you’re a backpacker, the hotels in the Cyclades will make you feel like part of the jet-set.” The writer refers to the amazing infinity pools and, of course, the wonderful views that are offered in most Cycladean hotels.
2. The beaches come in reds…
Specifically, the article refers to the Red Beach in Santorini.
3. …and whites…
The white beach of Sarakiniko, on the island of Milos “is the moon,” according to the article. Its lunar landscape seems to have been sculpted by the winds.
4. …and amazing blues
The Cyclades islands are full of beaches that resemble those of the Caribbean. However, some of inaccessible beaches with turquoise waters are the most beautiful in the world.
5. The churches are all gorgeous
The author was impressed by their simplicity and the fact that “they were built on solitary hilltops overlooking the sea” makes them even more incredible.
6. Fresh seafood everywhere!
“Greece is known for its simple, healthy cuisine based on fresh produce and, of course, fresh fish.” Furthermore the article mentions the Medusa restaurant in Mandraki, Naxos, as offering the best grilled octopus.
7. And surprisingly delicious wines
The wine of Santorini is unique. Be sure to try the VinSanto, suggests columnist.
8. Breathtaking views… everywhere
“The Cyclades are actually mountain peaks jutting out of the sea.” So how could the view not be breathtaking?
9. Ancient ruins
Ancient ruins in Cyclades and especially on the island of Delos are also stunning.
10. The villages are the definition of tranquility
“A top mistake among travelers in Cyclades is just sticking to the cruise stops and party-resorts. The islands’ real essence, as usually happens, is in the countryside.”
11. …and even shipwrecks are beautiful here…
In the Cyclades, something so unpleasant as a shipwreck, can turn into a stunning addition to the landscape.
12. No cars
There are some cars in Cyclades but people mostly use motorbikes, bicycles and even… donkeys.
13. …and there are more than 200 islands to explore!
Finally, the article concludes by noting that the Cyclades have a whopping 220 islands, most of which are uninhabited. Moral of the story? Don’t stick to the cruise stops! There are plenty of small islands where authentic villages and lazy afternoons reign supreme and, hey, exploring the smaller islands is the perfect excuse to spend a few days cruising around the dreamy blue Aegean.”