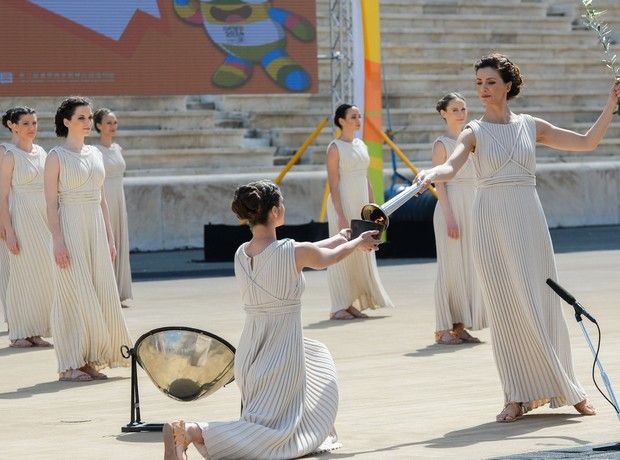 The ceremony of the Olympic flame for the Youth Olympic Games in Nanjing, China in 2014 was held today, in an empty Panathenaic Stadium.
The ceremony was attended by the Greek President of the Republic, Karolos Papoulias, while the new high priestess, Katerina Lechou (a famous Greek actress) passed the flame on to the first torchbearer, fencing athlete Marios Giakoumatos. The 17-year-old champion has already secured a place in the Olympic games that will take place in August.
The torch relay continued within the Panathenaic Stadium with runners from both Greece and China.
Jacques Rogge, as the IOC Honorary President, was present at the ceremony. “Today’s Lighting Ceremony marks the symbolic start of these Games. We hope it will inspire people to get active and to embrace the Olympic values. Let the Youth Olympic Flame now carry the passion and dreams of the young people to every corner of the globe before settling in Nanjing in August,” said Rogge.
Jacque Rogge was accompanied by four-time Olympic gold medalist, Alexander Popov, who is also a member of IOC since 2000.
Furthermore, students from various Greek schools as well as some children from China were also present. All were impressed by the ceremony.