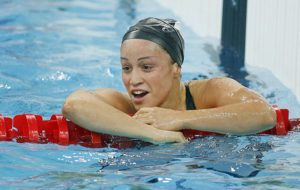 On Friday, Pelendritou, who is visually impaired, broke the 200m breaststroke record (clocking 2:51.01) in the SB12 category, before slashing the 50m record twice on Saturday, setting the bar at 34.87 seconds in the final.

The IDM swim meet for impaired swimmers is a major event in the run up to the summer’s European Championship, where Pelendritou, also known as the ‘Princess of the Pool’ will defend her title.