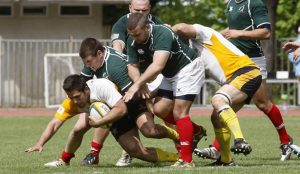 The Cyprus national rugby team beat Bulgaria 46-15 in Sofia to win Division 2C of the European Nations Cup on Saturday and extend their world-record winning streak to 22 international matches.

Centre Alex Zavallis was man of the match and scored 17 points, including two of the eight tries by the pan-Cypriot Mouffons, who are now ranked 40th in the world and 18th in Europe, above sides such as Sweden and Switzerland two divisions above them in the official European pecking order, according to website Rugby Redefined, which is the only agency that has attempted to rank the world’s 150 rugby-playing nations.

Meanwhile, in Thessaloniki, the Greece national side lost 8-52 to Luxembourg, who lead FIRA-AER Division 2D. Greece must now beat third-placed Norway in their last match and hope that Finland lose their remaining two games to be sure of avoiding relegation to Division 3, the bottom tier of the seven-level league that sits beneath the premier Six Nations in the European rugby pyramid.

The stampede of the Moufflons

Cyprus will host in-form second-placed Hungary, who after today’s result cannot catch the Moufflons at the top of Division 2C, in the season finale on May 17 in Paphos. Regardless of the result, Cyprus will be promoted to what is effectively the fifth division of European rugby next season, although they are already ranked highest in that division by Rugby Redefined. Nevertheless, coach Paul Shanks said Hungary are “the strongest of our opposition, and we will take them seriously.”

For reasons unknown to anyone but themselves, the game’s official governing body the International Rugby Board has “determined that Cyprus does not currently meet all of the necessary membership criteria”, so has yet to include the side on its world rankings, despite listing each of the teams the Moufflons have trodden into the turf in writing their entry to the Guinness Book of World Records.

Furthermore, the Cyprus team was refused entry by the IRB to qualifications for next year’s Rugby World Cup, and the ticket they earned as divisional winners was given to second-placed Slovenia, who were quickly squashed by Luxembourg, whereas the Moufflons would likely still be in the chase for a place at the finals.

The Cyprus Sports Federation allocates just one-tenth of the funding to rugby that the Greek national side gets, and Moufflons have to pay their own airfares to represent their country. Would-be sponsors can support the Cyprus Rugby Federation via its website.

However, what they lack in funding, they make up for in commitment, and with barely any help or support, they have achieved more than any other team in the island’s sporting history, and are still extending a world record that has made the rugby world, if not its governing body, take note.