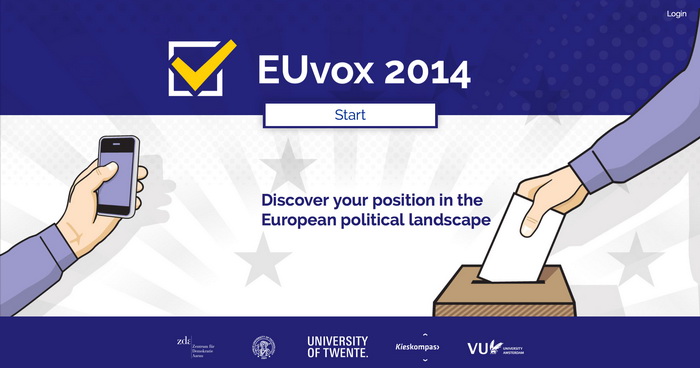 A new online voting advice application called EUVox was launched on Thursday by the European Union, which set it up for the forthcoming European Parliament elections with a view to helping EU citizens to compile their political profile while also finding out which political party is closer to their ideology and preferences.

“EUVox is an original academic tool, which helps EU citizens to define themselves based on their ideology, values and political beliefs,” Leonidas Antonakopoulos, head of the Information Office of the European Parliament in Greece, said.

So far, the online platform has given voters in more than 40 countries the opportunity to reach a more informed decision on whom to vote in local or national elections.

“The application aims to motivate citizens so as to be better informed but also to encourage them to participate in the upcoming EU elections,” said Vasiliki Georgiadi, Assistant Professor at Panteion University and member of the Greek academic team on the project.

Notably, in the 2009 EU elections, a total of 166 million voters (43.7 percent of EU citizens) used a similar application, called ‘EU Profiler’, to find a suitable voting choice. In Greece, that figure was 52.5 percent.

EUVox employs 30 questions – most of which are common across the 28 EU member-states— which are answered within a few minutes by the interested voters on a scale from “Completely Agree” to “Completely Disagree.” The answers are then matched to the respective answers of the political parties of the participant’s country, as well as to the answers of EU parties.

The voters have the possibility to display their answers in many different ways, thus being able to fully understand their own political standpoint but also the wider political landscape. Voters can choose to see in which percentage they agree or disagree with the views of the political parties in their own or another country, while also being able to filter the results to include only the topics that are more important to them.

Voters have also the chance to find their standpoint through different axial maps, charts and graphs, where they can explore if they are closer to “Traditional values” or “Social Liberal”, “Economic Left” or “Economic Right,” “Pro-Europa” or “Anti-Europa,” among others.

More than 100 specialists in partisan politics and electoral studies across all EU member-states worked together and collected information, so as to design a web platform that is fully impartial and not affected by any political party or ideology.

Take a look at the platform for yourself and found out which party is more suitable for you by visiting the website of EUVox.