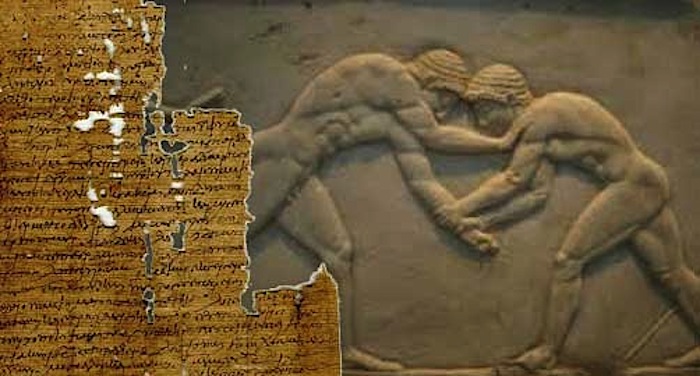 British historians at the King’s College in London have recently deciphered a delicate Greek papyrus that was discovered more than a century ago, which shows that the outcome of a wrestling match between two teenagers was predetermined.
The ancient Greek contract, which was discovered in the Egyptian city of Oxyrynchus, home to a large Greek-speaking population in antiquity and the source of most of these papyri, is dating from 267 AD and was made between the father of a wrestler called Nicantinous and the trainers of his rival, Demetrius. The two men were set to wrestle in the final of the 138th “Great Antinoeia,” which were a series of games held during a religious festival in ancient Egypt.
The contract says that Demetrius’ wrestler must “when competing in the competition, fall three times and yield” and in turn he would be rewarded with “three thousand eight hundred drachmas of old silver coinage.”
The ancient bribe also contained a clause that Demetrius would still get his money if the judges picked up on the fact the match was fixed and refused to grant Nicantinous victory, while Nicantinous’ father also arranged that if Demetrius would back out of the deal and win, his trainers would have to pay a larger sum to his son.
“If you were confident you would win, normally you would go for it. If you were not sure however, maybe you were cutting your risk by saying, ‘At least I get the bribe’,” professor Dominic Rathbone, who translated the ancient papyrus, told Live Science, and added, “Ancient people made such bribes to reduce their losses as the training of athletes was expensive and there were no prizes for runner-ups.”
In a fair match, ancient wrestlers fought to throw each other to the ground three times, using a number of holds and throws, some of which reportedly resembled body slams seen in modern professional wrestling.

A seven-year-old boy died after a fire broke out at a migrant camp in Thebes, northwest of Athens, late on Tuesday. The child's nationality was not released.
Diplomacy