NBG Owners to Meet May 10 to Approve €2.5bn Share Issue 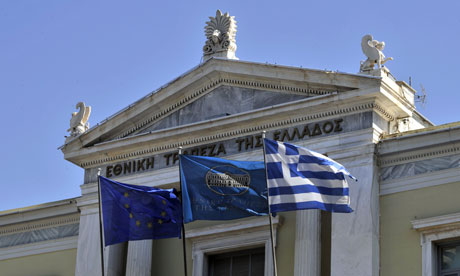 Greece’s second-biggest lender, the National Bank of Greece has unveiled the terms of a planned share capital increase that must be approved by the shareholders’ general meeting on May 10.
The bank plans to raise up to 2.5 billion euros, mainly from overseas investors, through a non pre-emptive issue of new ordinary shares at a nominal value of 0.30 euros apiece. Goldman Sachs and Morgan stanley will act as bookrunners for the issue.

“There is vivid interest both from hedge funds and institutional investors,” NBG deputy chief executive Petros Christodoulou told London’s Financial Times.
Riding on the crest of a wave of Greek bond issues, the junk-rated bank is also preparing to sell a senior unsecured bond to raise a further 750 million euros with a yield expected in the region of 4.5 percent, cheaper than the 4.95 percent paid to be paid on the sovereign bond issued before Easter.
NBG will use the funds to:

The bank made a profit of 809 million euros in 2013, after a loss of 2.1 billion euros in 2012. It had planned to avoid raising fresh capital to meet its mandated capital requirements, seeking instead to cuts costs and divest non-core assets, but changed tack under pressure from the central bank.