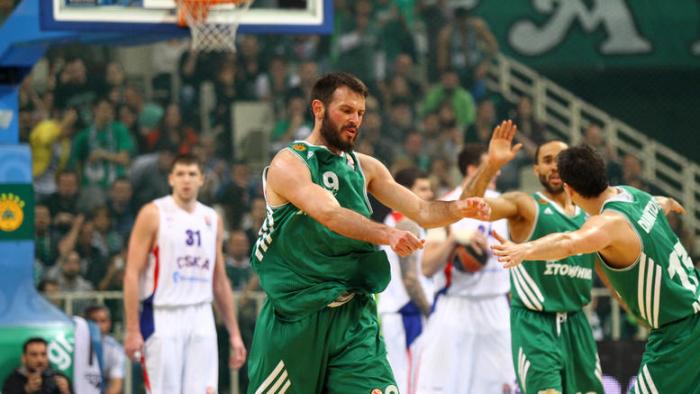 Both Greek teams in the last eight of basketball’s Euroleague managed to edge do-or-die victories in closely contested play-offs Monday night, kindling fading dreams of keeping the trophy in Greece for a fourth consecutive year by pulling their respective series back to 2-1 down with two to play.
Facing 2-0 deficits in the best-of-five series, defending back-to-back champions Olympiakos kept alive the dream of a hat-trick of championships after scraping past Spain’s Real Madrid 78-76 in the dying seconds of a cliffhanger in Piraeus, while 2011 winners Panathinaikos ground out a tense 65-59 victory over CSKA Moscow in Athens to stay in the competition.
Two free throws by Kostas Sloukas with just six seconds on the clock snatched Olympiakos a lifeline to the final four in Milan next month after Madrid had rallied from 11 behind to lead 73-74 with 44 seconds remaining, until Georgios Printezis answered with a three-pointer that tipped the balance.
Bryant Dunston kept one hand on the title for Olympiakos with nine rebounds and 21 points, with Vassilis Spanoulis adding 17 points, and 11 each from Brent Petway and Matt Lojeski. Dunston said: “We were more aggressive at both ends of the court, especially in defense … we knew what we had to do. As far as my own performance goes, I tried to help the team, grab the rebounds and do the work. We’re only thinking about game four now, and nothing else.”
Madrid coach Pablo Laso echoed Dunstan’s view: “Congratulations to Olympiakos. They were aggressive and they owned the rhythm, the rebounds and the defense in the game. Details made the difference, such as the free throws and a three-point shot by Printezis. They are the Euroleague champions, they are a good team and they defended their title.”
Meanwhile, up the road in Athens, centre Stephane Lasme netted 13 points for six-times Turkish Airlines Euroleague champions Panathinaikos BC, although the top scorer in a low-scoring affair was CSKA Moscow’s Sonny Weems with 14.
Panathinaikos legend Dimitris Diamantidis added five assists, taking his career total to 978 and breaking Theo Papaloukas’ tournament record of 977. His early three-pointer helped his team to a good start as they quickly built up a lead of 11 points, a gap that had narrowed to two just before half-time.
The Greens struggled to accumulate points, especially in the second half and defended an ever-dwindling lead manfully, holding CSKA at bay for over six minutes without conceding a point, until CSKA nudged in front 58-59 for the first time with only three minutes remaining.
Cometh the hour, cometh the man, and Diamantidis ensured Panathinaikos’ grip on survival with that record-breaking fifth assist and two free throws to close out the win and take the series to a fourth round.
However, the two Greek giants still have mountains to climb if they are to keep the trophy in Greece, and must win Wednesday’s home ties if they are to take their respective series back to Moscow and Madrid for a decisive fifth round next Friday.
“We played too badly in game two and that gave us extra motivation tonight,” said Panathinaikos’ Jonas Maciulis. “We were offended by our own performance and knew we needed to play well in game three. Our defense was the key for us, that is what we know best. We must keep it up. Game four will be very difficult. CSKA don’t want to back to Moscow and play game five. We play at our home court. I think we have a better rotation and we must win. There are no excuses. We have to be in the Final Four.”