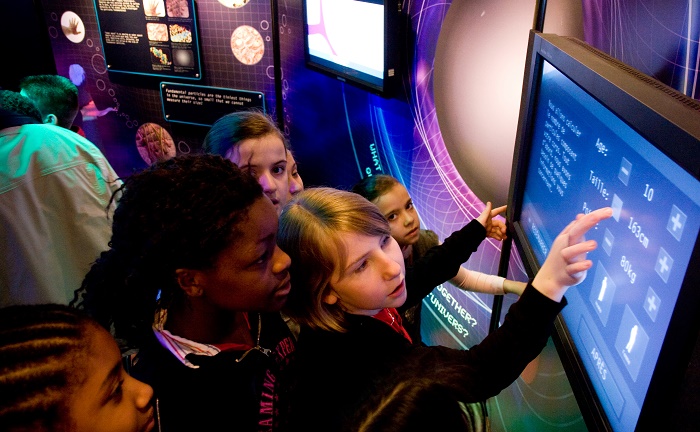 An impressive, interactive exhibition created by CERN, aiming to bring the public closer to the experiments of the large underground accelerator, will be hosted at the Eugenides Foundation from April 12 to May 31.
The exhibition can be attended by both adults and children over the age of ten. It is entitled “Accelerating Science” and organized by the European Center for Nuclear Research (CERN) with the support of the Dudley Wright Foundation. The exhibition has already been presented in many European countries, spurring the interest of thousands of children and adult visitors, who seek the answers to nature’s mysteries.
The exhibition will be brought to Greece by the Eugenides Foundation and the Greek-German School, Ellinogermaniki Agogi, in collaboration with the Department of Physics at the National Technical University, the Department of Nuclear and Particle Physics, at the University of Athens, the Institute of Accelerating Systems and Applications and the Union of Greek Physicists.
The exhibition presents CERN’s underground facilities in a simple way, while explaining why it is the most important international center for research in particle physics. It also presents the fundamental scientific knowledge about the basic building blocks of matter and the evolution of the universe in a comprehensible manner, focusing on CERN’s crucial contribution and experiments.
Interactive touch screens and various games promise to win the interest of young children. At the same time, scientists from different disciplines, along with specially trained undergraduate and graduate students, will attempt to explain CERN’s secrets to the visitors.