Helena Charbila on New Movie ‘Bereave’ and Her Music 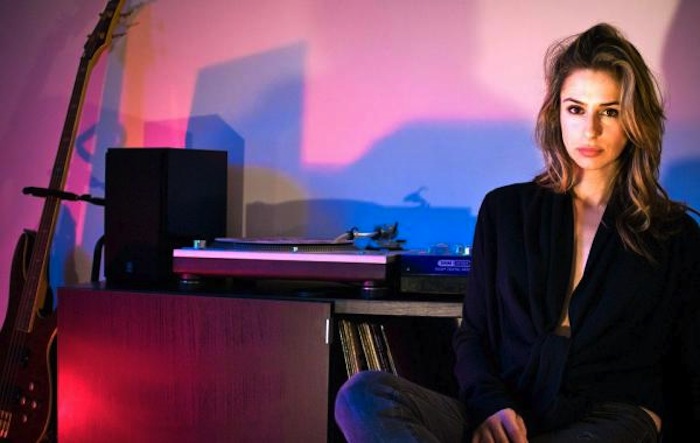 You may have recognized her from any one of a few Michael Buble videos. Or, you might have seen her in a McDonald’s commercial that aired nationally in the U.S. (which just so happened to run during the recent Winter Olympics). Maybe you even know her voice, since she successfully performs under the moniker of electro/pop artist, Kid Moxie. Now, you’re going to be seeing — and hearing — much more of the multi-talented Helena Charbila.

The Athens born-and-raised beauty left her hometown to head to San Francisco 10 years ago, studying theater and music before setting her sights further south towards Los Angeles. A Women Of The Year nominee by Greece’s Life and Style magazine for her international career in acting and music, Charbila is hard at work splitting her time now between Greece and the States. With appearances in television commercials, her music being featured on Showtime’s “The L Word” and on MTV/Logo TV, as well as roles in the forthcoming films “Bereave” and “Caravaggio and My Mother the Pope,” the young actress/singer is quickly making her mark on Hollywood.

Greek Reporter spoke with Charbila about her burgeoning acting career, as well as how she manages to work on music, television and film, all while being involved with a very charitable cause run by famed Hollywood director David Lynch.

When did you start acting?
I started acting as a kid in Athens, Greece, doing some TV shows as well as children’s theatre. I remember having so much fun with it at the time but never thinking that this would be something that I would want to pursue as an adult.

You’re appearing in the upcoming ‘Caravaggio and My Mother the Pope.’ What is your role in the film?
That was the first film I shot when I moved to L.A. I play the young version of Cleopatra, who appears to Caravaggio as an illusion from the past. The film is still in production.

You also have a role in the latest Giovanis brothers‘ film, ‘Bereave.’
I play a bartender, Renata. She is a good mix of tough and sweet, she likes to test her limits with people but knows when it’s time to stop.

Legendary actors Malcolm McDowell and Keith Carradine are part of the ‘Bereave’ ensemble cast. What was it like working with them on-set?
They were both very warm, encouraging and easygoing. Malcolm McDowell has to be one of the most passionate and authentic people that I have ever met in Hollywood. I feel very lucky that I got to meet and work with him.

And you’re involved with music, performing as Kid Moxie. Do you prefer music or acting?
It’s very hard to choose one over the other. One thing I can say, though, is that music gives you more creative freedom because you get to write your own words and melodies and perform them exactly the way you want to. So in a sense, you get to be the writer, director and performer, all at once.

How did you come up with the moniker Kid Moxie for your work as a music artist?
When I started this project a few years ago, I wanted a name that sounded powerful yet playful and that felt like a good choice. I still like it, so maybe it was a good choice after all!

Is there anyone you’d like to work with in Hollywood that you haven’t had the chance to yet?
So many people! If David Lynch ever directed a movie again, it would be my biggest dream come true to act in it!

How about musically; who would you like to collaborate with?
I was lucky enough to collaborate with my biggest musical influence, Angelo Badalamenti, [who is] David Lynch’s composer, but there are just so many amazingly talented musicians and composers that I would love to work with. The top of my list would include Clint Mansell and Moby.

You have some involvement with David Lynch, though. Particularly with his Foundation. How did that come about?
I donate music to raise money for underprivileged populations. The David Lynch Foundation features some big artists like Moby, Maroon 5, Iggy Pop. I have been practicing Transcendental Meditation for four years now, and one of the people I met through my TM practice worked for the Foundation’s record label — TM Music — and felt that my music would fit the vibe of the foundation. The label was founded by David Lynch and the catalogue is aimed to raise awareness for the importance of TM practices and also raise funds for DLF’s charitable programs.

Check out this original track she donated to the Foundation:

Have you worked on the soundtracks for any of the films you’ve appeared in?
I have made music for TV shows and for some independent movies before, but only recently have I had the chance to work on music for a film that I actually acted in. I am currently working on a song for the movie ‘Bereave,’ and also on some music for a Greek film project that is currently in production.

What’s next for you?
I recently finished my second full-length album as Kid Moxie, which I’m working on releasing in the fall. I will also be shooting a film in Greece this summer, which I will try to combine with some island hopping!