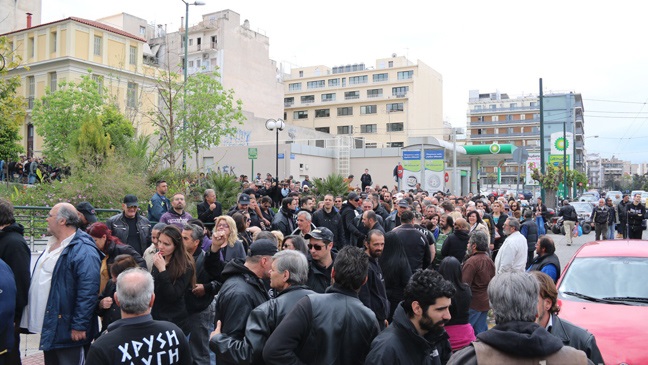 Golden Dawn distributed food to needy Greeks who could prove themselves as such outside the ultra-nationalist party’s Athens headquarters on Thursday morning.
Golden Dawn spokesman Ilias Kasidiaris said: “Our “terrorist organisation” is organising food distributions instead of having fun in villas.” When asked about a possible lifting of his parliamentary immunity, Kasidiaris merely wished the judges a happy Easter in response.
After the release of the secretly filmed video showing former cabinet secretary Panayiotis Baltakos in a “friendly”conversation with Ilias Kasidiaris, Greek Parliament and judicial authorities have proposed lifting Kasidiaris’ parliamentary immunity on charges of making and using an illegal recording. He is also accused of setting up a criminal organisation and illegal weapons possession.
Golden Dawn’s ‘Greeks-only’ food distributions have drawn widespread reactions over the party’s racist policies. In May 2013, Athens Mayor George Kaminis banned a soup kitchen organized by Golden Dawn and described the initiative as a “soup kitchen of hatred.” Piraeus Mayor, Vasilis Michaloliakos did likewise on December 20, 2013.

Prince Philip, the Duke of Edinburgh and consort of the Queen of England Elizabeth II, passed away early Friday morning at the age of...
Archaeology