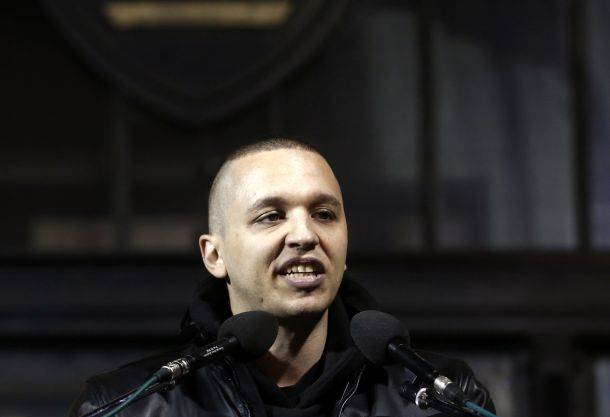 The leading prosecutor in the case of the video secretly filmed by Ilias Kasidiaris, which shows the former cabinet secretary, Panayiotis Baltakos in conversation with the Golden Dawn MP, has sent the case file to the Greek Parliament asking whether Kasidiaris’ immunity should be lifted.
If the Parliament decides to lift the MP’s immunity, he will be facing charges for making and using an illegal recording. He already faces charges of setting up a criminal organization and possession of illegal weapons.
According to justice officials, the video of Baltakos, as well as Kasidiarsis’ threat that he would release more footage, was an attempt to undermine the Greek justice system and make it appear as if the judges are mouthpieces of the Greek government.
Furthermore, many believe that the video was released in anticipation of the Supreme Court’s decision as to whether or not Golden Dawn members can stand in May’s municipal and European Parliament elections. However, Golden Dawn has been preparing for a negative ruling by forming a new political party called National Dawn under which banner its members will be able to run in upcoming elections.
Ilias Panagiotaros Shocks Australia
Another Golden Dawn MP, Ilias Panagiotaros, who is under criminal investigation, shocked Australian audiences when he publicly declared that the nazi leader, Adolf Hitler was a “great man,” during an interview with Australian television show 60 Minutes.
“Hitler was a great personality, as was Stalin,” he said. “At certain points in history, someone has to do the dirty work,” Panagiotaros added.