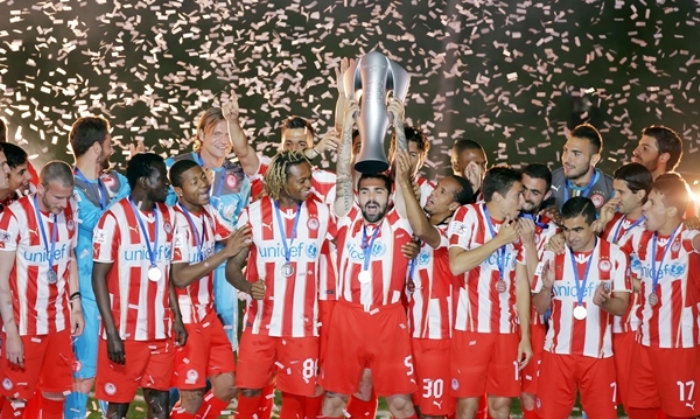 While Olympiakos lifted its 41st championship title, secured last month with games to spare, in front of a home crowd at the Karaiskakis Stadium Sunday, their 1-0 victory in the last fixture of the season also doomed their opponents, Apollon Smyrnis, to relegation from the Greek Super League.
Flamboyant striker Javier Saviola’s close-range goal in the 88th minute ensured the champions finished the season on a high, but also sealed Apollon’s fate. Needing a win that to have any chance of staying in the top division, former Northern Ireland and Fulham boss Lawrie Sanchez’s struggling visitors had slim hopes of scalping Olympiakos coach Michel’s double-chasing side.
Despite a determined effort, Sanchez’s team was beaten by a solitary goal from former Argentina international Saviola two minutes from the end of season that effectively ended weeks ago for Olympiakos, who guaranteed their 41st league title last month, around the same time as relegation became unavoidable for long-doomed stragglers Aris, who ended a dismal season with a goal-less draw against Giannena.
Saviola’s late winner for the champions dashed Apollon’s hopes of avoiding the same fate, but the final whistle heralded the presentation of the Greek Super League trophy, sending Olympiakos fans into raptures, while Apollon supporters were left hoping, in vain, that Panathinaikos would do them a favour against Xanthi, whose 3-1 victory ensured they leapfrogged Smyrnia to qualify for a chance to preserve their top-flight status in a play-off against whoever finishes third in division two.
Olympiakos finished 17 points ahead of PAOK Salonika, which lost 3-2 at Levadeiakos, while elsewhere Veroia beat Asteras 1-0, Platanias drew 0-0 at Panionios, Ergotelis defeated Kalloni 3-0, Panaitolikos beat OFI 1-0 and Atromitos won 3-1 at Panthrakikos.
Runners-up PAOK will be joined in play-offs to determine the second Champions League qualifier and two Europa League spots by Atromitos Athinon, Panathinaikos, and Asteras Tripolis, who finished third, fourth and fifth respectively.

The health of Greek convicted terrorist Dimitris Koufontinas has swiftly deteriorated lately, it was made public on Saturday evening.
Food