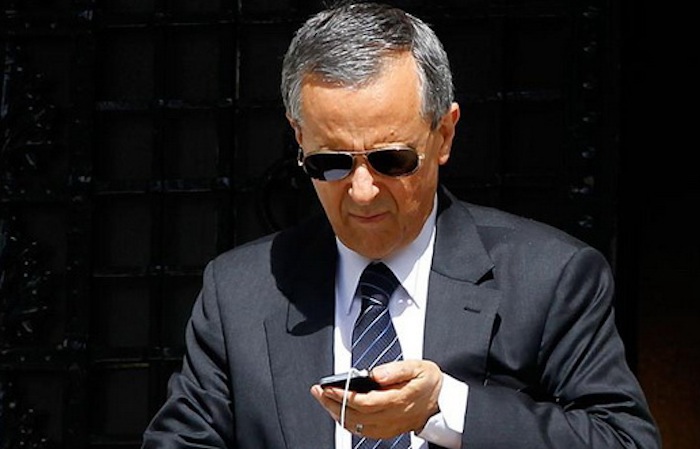 Former Greek cabinet secretary Panayiotis Baltakos, who was forced to resign over a video showing him in friendly talks with a Golden Dawn MP, has mooted a merger between the conservative ruling New Democracy and the neo-nazi ultranationalist Golden Dawn party, while leaving all open possibilities of him forming a new political movement.
“The right wing must reunite,” Baltakos said in an interview, underlining that the parties New Democracy, Golden Dawn and Independent Greeks ANEL have a combined approval rating of 46 percent. “If we unite, we will stay in power for 50 years. Otherwise, leftists will rise to power,” he added.
“I wasn’t the only one in contact with Golden Dawn. There were also others, everyone played his own part,” he mentioned on his relations with Greece’s fascist party, while saying that he was approached by a rightist party to run in the forthcoming European parliament election, an invitation he declined. “I am New Democracy,” he explained.
Baltakos also said that he was approached by several uniformed officials urging him to form a new party, which they would support.
“If, following the elections, New Democracy stays on its current course towards becoming a centrist party, that would equate to my exclusion from such a New Democracy, and I would consider all alternatives,” he said.
Finally, upon being asked whether he will persist in collaborating with Golden Dawn even now that the party is being accused of being a criminal organization, he replied: “Not with them. I’m targeting the 500,000 Golden Dawn voters that aren’t Nazis.”
“I played a dangerous but necessary role for the party and the country and I paid the price,” Baltakos said in his interview, adding that his contact with Golden Dawn gave him insight into the party’s secrets and strategies.

The Ten Most Beautiful Lakes in Greece