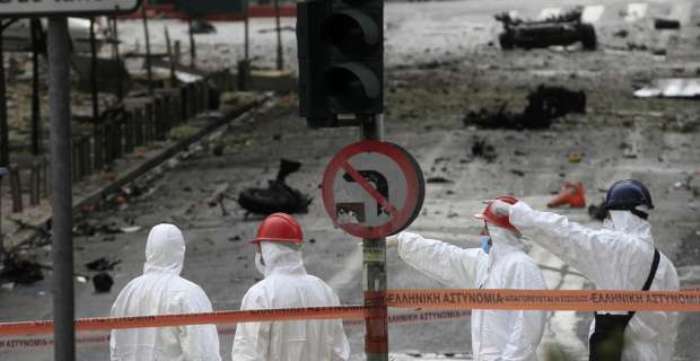 After the initial investigation on yesterday’s hit in the heart of Athens, Greek Counterterrorism analysts consider the possibility of new car-bomb attacks and targets of economic interest or policemen.
According to sources, the analysts seem certain that the attack was organized by Nikos Maziotis in cooperation with the Group of Popular Rebels (Omada Laikon Agoniston – OLA). The way in which the event played out — the bomb, the two phone calls, the escape route with the motorcycle which was not abandoned — is evidence that Nikos Maziotis, who reproduces mode of actions similar to the Revolutionary Struggle’s (Epanastatikos Agonas – EA), was behind the attack. However, a possible collaboration between Nikos Maziotis with Christodoulos Xeros in an effort of enlisting all the rebels of Athens in a common front cannot be excluded.
As the hours pass, counterterrorism analysts are coming closer to the conclusion that the 75kg of explosives were Anfo (ammonium nitrate fuel oil). Given the fact that the Counterterrorism analysts are convinced that the Maziotis team has returned, a main concern is to guess the team’s next move. “There is a strong concern for another reoccurrence. However, we cannot predict what the target will be. We estimate that it will be of economic or police concern. Let us not forget that Maziotis likes to surprise,” noted a source from secret service, adding that “if the terrorists claim responsibility by publishing a proclamation, then we will know if Christodoulos Xeros took part in the attack.”