Greece Grinds to a Halt Amid Nationwide 24-hour Strike 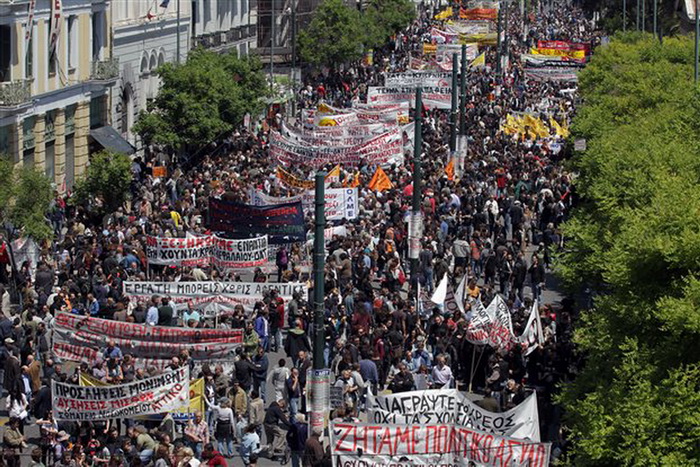 Unions representing private sector workers and state employees in Greece launched a 24-hour nationwide general strike on Wednesday against the austerity measures put through by the government.
Called by Greece’s umbrella unions ADEDY and GSEE, the industrial action disrupted trains and ferries, as well as public services. Hospitals were operating on skeleton staff and pharmacies were scheduled to close for the day. Teachers, prison staff and court employees were also participating in the strike.
Thousands of protesters marched through central Athens in the planned demonstrations. Police said at least 6,000 people participated, carrying banners and chanting anti-austerity slogans in the initial demonstration from central Klafthmonos Square to the Greek parliament. Hundreds more held another rally at Omonoia Square, called by Communist-affiliated labor union PAME.
The Greek labor unions said that they are seeking an end to the painful policies imposed by successive governments to secure international bailout loans after Greece came close to bankruptcy in 2010.
“Today’s strike is being held for the working class to respond decisively to the measures the government is taking against workers’ rights, and to the problems of poverty, unemployment, and the abolition of collective wage agreements,” PAME member Giorgos Pondikos said.
Rallies across the country
Major anti-austerity rallies were also organized in other big Greek cities.
In the northern port city of Thessaloniki, marches the Ministry of Macedonia and Thrace were attended by hundreds of employees laid off or affected by the government’s new ‘availability measure’. Local city buses were operating on skeleton staff, causing major congestion on the city’s roads.
“The government continues its anti-labor policy, passing omnibus bills that knock out society and the economy, cutting any social security benefits and driving the country further into recession,” said members of the Labor Center at a rally in Heraklion, Crete.
Rallies and demonstrations were also held in Patras, Corfu, Larissa and Tripoli.