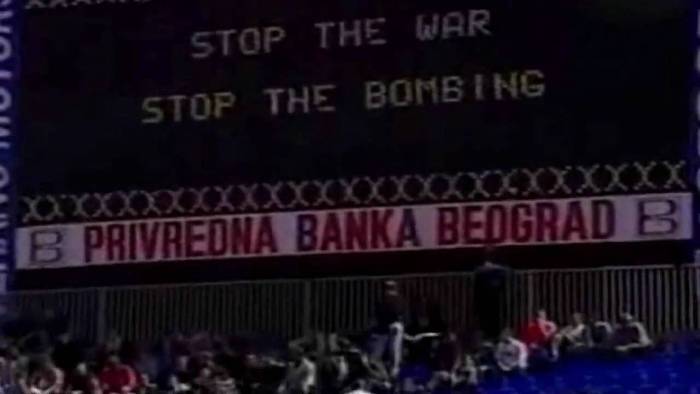 Fifteen years ago, at the height of the NATO bombing of Serbia, one of Greece’s top football teams, AEK Athens defied an international embargo and traveled to the Serbian capital, Belgrade, to play a friendly match against FC Partizan in a show of compassion and solidarity towards the embattled Serbs.
With the Yugoslav people facing daily NATO air strikes, AEK Athens players travelled on a bus via Hungary to take on one of Yugoslavia’s top teams. With no guarantees for their safety, AEK players and managerial staff showed their courage by heading into a war zone and gained the love of the embattled Serbian people.
After crossing into Serbia, locals touched at kind AEK’s gesture repeatedly stopped the team bus in tearful admiration and gratitude – a welcome that defied mere words, and which will forever live in the memories of those who witnessed it.
Only hours before they would seek the protection of a bomb shelter during the nightly NATO air strikes, 25,000 Serbs attended the match, along with the 52 Greeks who made the journey with AEK, who joined together not in chanting the typical soccer songs, but slogans against the war, NATO and USA.
When the teams came onto the pitch until just before kick-off, they were holding a giant banner bearing the message: “NATO STOP THE WAR – STOP THE BOMBING.”
The game ended after an hour upon a pitch invasion by fans eager to embrace the players in admiration for their brave solidarity, as well as to protest the war and call for peace. Just for the record, the scoreline at the time was 1-1, Kezman having put Partizan in front after 13 minutes before Paris Zouboulis equalized for AEK in the 26th minute.
The greatness of a team can be measured in the titles it has won. Surely, however, it can also be shown through such gestures. AEK Athens won perhaps the most important title of the club’s history; a humanitarian championship. A victory of a score-draw that the team’s fans and supporters can brag about forever. AEK Athens made history that day, a chapter that is worth more than all the other silverware combined.
[youtube]CtVviKilxSw[/youtube]CtVviKilxSw

Emirates Airlines, based in the United Arab Emirates, plans to restart flights between the United States and Greece on June 1, 2021
Greece