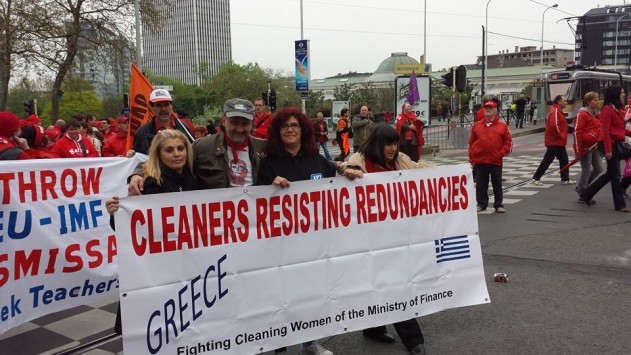 Three dismissed cleaning employees from the Greek Ministry of Finance participated in a European trade union rally in the center of Brussels.

The rally that took place on Friday, April 4 wound up with clashes between the police and the protesters. Some unionists threw oranges and stones and Brussels police responded by using tear gas and water cannons.

The European trade unions representatives gathered in Brussels after a call from the European Trade Unions Confederation (ETUC) in order to protest against austerity measures. Among others, trade unionists were demanding a new, social Europe that involves “no austerity, but big investment aimed at steady economic growth and quality jobs,” according to the ETUC press secretary, Emanuela Bonacina.

The three Greek cleaning employees who participated in the rally have been suspended by the Ministry of Finance since September. Since then, they have been gathering outside the Ministry everyday to protest against availability measures implemented by the Greek government.

In Brussels they joined the European protest by holding a banner saying “Cleaners Resisting Redundancies – Fighting Cleaning Women of the Ministry of Finance.” Their expenses for the trip were covered by the European union Alter Summit and the three women were hosted by members of the Greek community in Brussels.