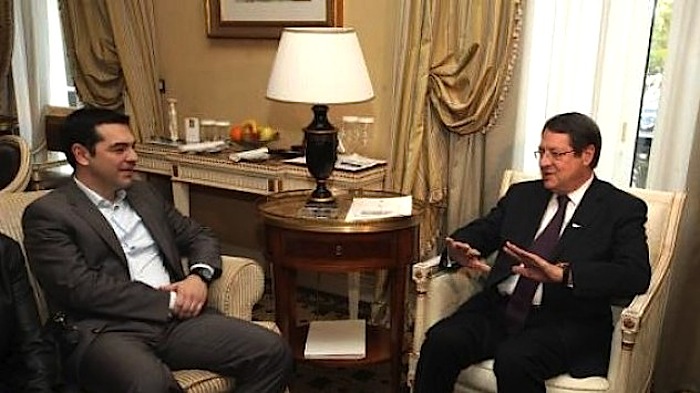 Main opposition party Radical Left Coalition (SYRIZA) leader Alexis Tsipras held a meeting with Cyprus President Nicos Anastasiades on Friday for a briefing on the progress of talks for a solution to the Cyprus problem.
Tsipras reiterated SYRIZA’s steadfast “support of procedures and talks in the direction of achieving a fair and viable solution of the Cyprus issue, that for us is none other than the prospect of a bicommunal, bizonal, federal Republic of Cyprus, with one sovereignty, one citizenship, without third guarantors and without foreign troops”.
The SYRIZA leader stressed his concerns to the Cyprus President that both Greece and Cyprus are at an extremely difficult turning point due to the economic crisis, which could perhaps serve as leverage for the imposition of unfair options.
“We stressed that such a thing cannot be accepted and we believe that it would not be accepted either by the people of Cyprus, or of Greece,” Tsipras concluded.