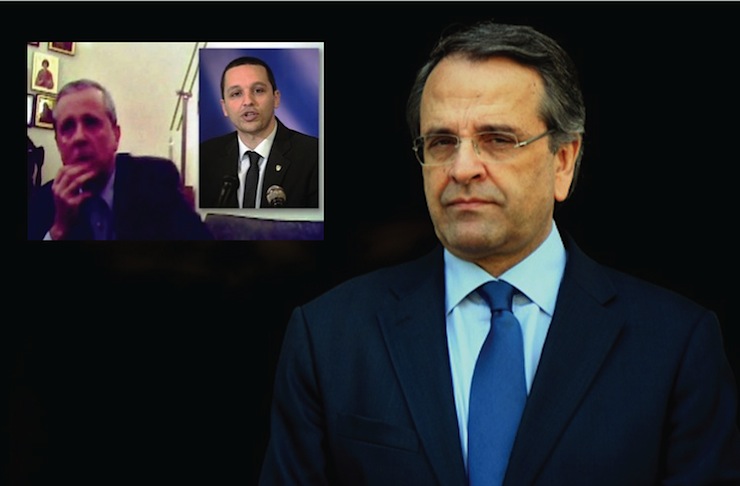 Earlier on Friday, Greek Prime Minister Antonis Samaras held a meeting with PASOK leader and Deputy Prime Minister Evangelos Venizelos on the latest political developments and the recent disclosure of the video showing the former aide to Samaras in friendly talks with a Golden Dawn MP.
“From the beginning I have fought harder than anyone else against Golden Dawn. I won’t allow a criminal organization to govern political life,” Samaras said in a statement following the meeting, commenting on the threats of Golden Dawn MPs to disclose further videos that could harm the ruling coalition government and destabilize the fragile Greek political scene.
The PM mentioned that he won’t tolerate “preposterous and unacceptable behavior from any government official,” while pointing out that the government fully supports the independence of the justice system and condemned those calling for the resignation of the Ministers of Justice and Public Order.
“We won’t allow anyone to pull us back. The straight line I have drawn for the country doesn’t change,” the PM added, repeating that Greece is recovering from the crisis and exiting to international markets.
“We proceed with the necessary unity and equally necessary political stability,” Samaras underlined.
Upon exiting the Maximou Mansion, Deputy Venizelos referred to the stability existing in Greece now that the country is emerging from the crisis and the memorandum. “No one can undermine this stability,” Venizelos mentioned.
“The prime minister and I, as government vice-president and PASOK leader, are the ones who fully guarantee the implementation of the policy agreement,” he commented.
Venizelos also addressed Golden Dawn, “not the party, the criminal organization, according to the indictment of the Greek Justice system, which acted on its own criteria, independently and in accordance with the Constitution,” Venizelos said. He sternly criticized “certain political forces” and claimed, “It is a tragedy for democracy and the rule of law to adopt the allegations of the case’s defendants in return for petty party benefits.”
SYRIZA: Samaras’ statement is a guilty plea
“Samaras may have broken his vow of silence after days but has adopted the usual behavior of a guilty person. Today’s statement of Samaras constitutes a guilty plea. Instead of being Prime Minister and addressing his own responsibilities, Samaras resorted to his favorite method of accusing SYRIZA,” mentioned Greece’s major opposition party in a statement, referring to the moderate reaction of the Greek PM and the key role played by Panayiotis Baltakos within the Samaras administration.
SYRIZA mentioned that the PM is personally accountable for the existence of a “state within a state’” and that he should explain himself in Parliament, while preparing his “heroic” exit.