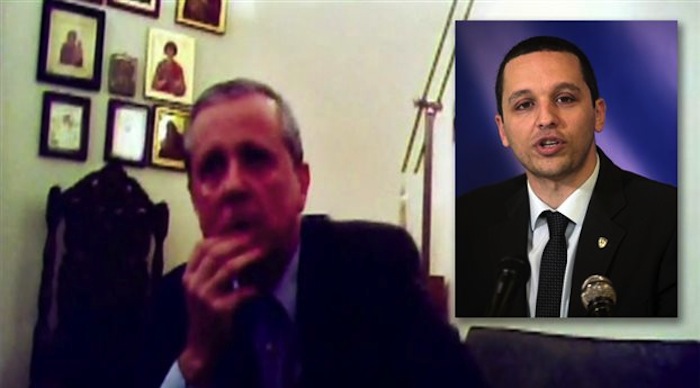 A day after being forced to resign over a video showing him engaging in not-so-favorable talks with Golden Dawn second-in-command Ilias Kasidiaris, former cabinet secretary of the government Panayiotis Baltakos revealed in an interview on Thursday, that more damaging recordings could possibly emerge in the future, insisting however that Greek PM Samaras had no knowledge of his conversations with the Golden Dawn members.
“The prime minister did not know,” Baltakos told the Greek news radio Real FM, and added, “I was operating on my own initiative as a mediator for the good of the country. I wanted to dislodge the thousands of Greeks who had voted for Golden Dawn. The 500,000 Greeks who voted for Golden Dawn are not Nazis.”
Baltakos said many times during the interview that he didn’t remember what he discussed with the neonazi MPs, arguing that these meetings were held prior to the murder of Greek rapper Pavlos Fyssas by a Golden Dawn supporter last September.
The intercepted video though suggests that the meeting with Kasidiaris took place one month after the assassination and shortly after the imprisonment of Golden Dawn leader Nikos Michaloliakos on charges of being part of a criminal organization.
“For the good of the country, somebody had to meet with these people,” he said. “We had to know what they were thinking, their strategies and movements. I told them what they wanted to hear so that I could win their trust.”
In his radio interview, Baltakos didn’t rule out the possibility that Golden Dawn may release more recordings of their meetings with him.
“There may be more videos and I may have said more things,” he said. “I cannot remember with which Golden Dawn MPs I met. I do not remember what else I have said and if I said something about Antonis Samaras,” he added. “Six months have passed and I can’t remember what I said.”
Upon being asked about the things mentioned in the in-question video , Baltakos said that all opinions expressed there were nothing new and were views also addressed by Greece’s media. “What I said was nothing new. It’s all written down. All opinions I expressed were also supported by lawyers on television. It was all written down in the press,” he said.
“I was against the prosecution of Golden Dawn”
Addressing criminal charges to a political party in a country freed in the past by armed warriors is wrongful. You shouldn’t convert a political formation into a prosecuted party. We shouldn’t persecute them. When they are offering free food at Syntagma square and we forbid it, then we are just advertizing them.”
“My son is independent. He has a code of honor.”
Baltakos denied that his son, Dimitris, forced his way into Golden Dawn’s office in Parliament on Wednesday and fought with MPs. He said, instead, that there was an altercation in the corridor. The New Democracy officials claimed he had not spoken to his son, who is wanted for questioning, since then.
“I don’t know where my son is,” Baltakos told. “He is independent. He is a coast guard officer. He has a code of honor, which doesn’t include wire tapping.”
Baltakos will testify on Tuesday
The ex-cabinet secretary is scheduled to testify this coming Tuesday on the video case. The Greek attorney Kalliopi Dagiada has taken the lead in the immediate investigation, which was launched into the case on Wednesday, and has already requested all relevant material being sent over by Greece’s parliament.
The attorney will also investigate if criminal charges are to be brought against Golden Dawn MP Ilias Kasidiaris for committing the felony of violating the law on the protection of personal data.
Golden Dawn and PASOK reaction to the incident
On Thursday, Golden Dawn MP Ilias Panagiotaros unleashed in Parliament a direct threat for the eventual disclosure of more videos like the one starring the former cabinet secretary Panayiotis Baltakos.
“Be prepared for more nonsense,” said the parliamentary spokesman of Golden Dawn, commenting on what was said earlier on Thursday by New Democracy MP Sofia Voultepsi, “We must consider Baltakos’ action as nonsense and personal responsibility.”
PASOK MP Paris Koukoulopoulos argued that his party may be supporting the government but pointed out that an issue for the proper function of the government seems to be arising.
“New Democracy must understand what happened yesterday. If you haven’t taken notice, the theory of the two extremes, in which you have invested for so long, does not exist. The extreme is one: violence and fascism. Therefore, anything resembling radical right behaviors should be cut off,” Koukoulopoulos said.