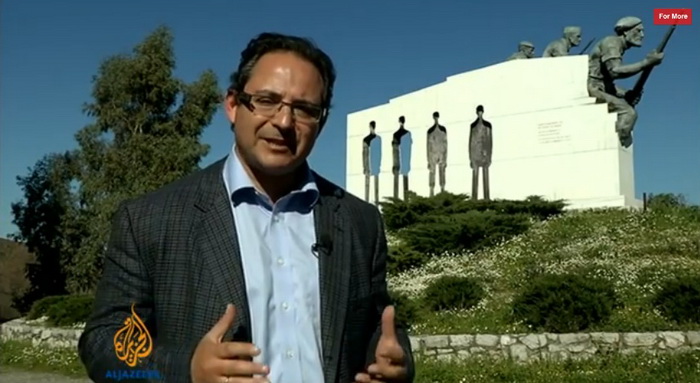 The leading Qatari news broadcaster “Al Jazeera” featured an on-site story on the Greek claims for the Second World War German war reparations and the historic massacre at the Greek village of Distomo, located in Central Greece.
Al Jazeera’s correspondent to Greece made a road trip to the village, where during WWII German troops slaughtered the majority of the village’s population. Two survivors talk to the broadcaster and tell their story of the tragic event, which until today has not been compensated by the German government.
In the story entitled “Greece seeks war reparations from Berlin,” the correspondent addresses the fact that Greek people and government have recently intensified their claims to Germany, so as to receive the WWII reparations which were never paid out by the Germans, although international agreements saw for a compensation of around $7 billion as a result of the atrocities conducted by Nazi troops on Greek territory.
The journalist points out that from the half million Greeks killed during the war, only 30,000 deaths came as a direct result of the battles. The rest died during the four-year German occupation of the country.
The Greek parliamentary movement “Active Citizens,” which is primarily focusing its activities on the Greek WWII claims while also bringing up the Distomo story, mentioned in a statement, “While we are asleep, without anyone being able to awaken our conscience and our sense of Greece, an Arab station pays tribute to our rights.”
“At the same time, of course, Greece’s systemic mass media and the majority of the elected Greek MPs turn a blind eye, not wanting to disturb the German circles…,” the movement added.
The whole story by the Arab broadcaster can be viewed below:
[youtube]AeiOUe5qsi8[/youtube]