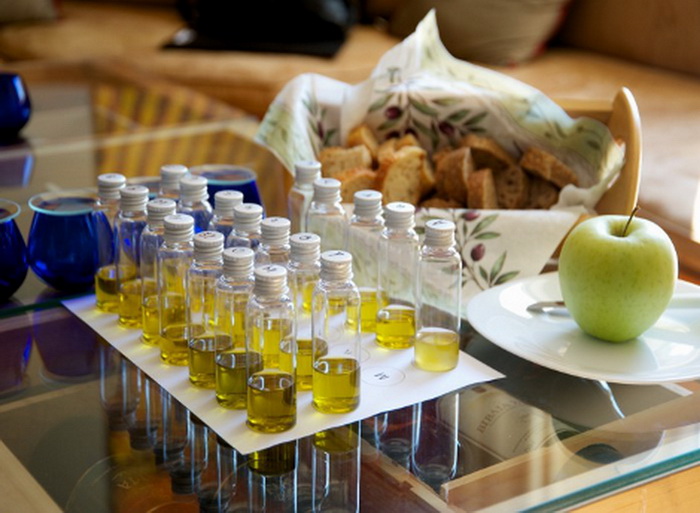 For Greece, extra virgin olive oil is considered to be an agricultural product of utmost priority. The Greek state, however, does not provide the opportunity to methodically learn how to produce this high quality product, as Greek universities, technological educational institutes, schools or vocational schools do not offer a single course on its production. A workshop, however, comes to fill this gap and attracts olive oil producers and bottlers from several Greek regions to Athens.
Vasilis Frantzolas is a third-generation olive oil producer from the village Ligourio in Argolida, in south-eastern Greece, and has been holding olive oil seminars in Athens for the last couple of years. Frantzolas has worked as a civil engineer and construction manager and has recently acquired a M.Sc. in Food Policy at the City University of London. Having attended several olive oil tasting workshops in Greece and Italy, the Greek producer finally decided to pass on his passion for extra virgin olive oil to other people interested in this highly nutritious food product.
The olive oil seminars are divided in two cycles. In the first cycle, participants get to learn how to properly cultivate and prune olive trees, while also being acquainted with the procedures of producing prime olive oil and the usual mistakes made in the olive mills. The second cycle features a description of the procedures for exporting olive oil and a comprehensive analysis of different olive oil packaging, while also tasting several award-winning prime olive oils from Greece, Italy and Spain.
In order to prove that Greece has the ability to produce top quality olive oil if all procedures are followed, Frantzolas recently became involved in the production, packaging and distribution abroad of an organic extra virgin olive oil from Amfissis olives, which are cultivated in the Greek northern region of Pelion. Within six months, the “Pelion Olive Farms” olive oil won five major international awards.
Today, Frantzolas is also consulting the largest olive oil producing company in the Arabian Peninsula, while cultivating five million olive trees.
For more information on the olive oil workshop, visit: www.oliveoilseminars.com.