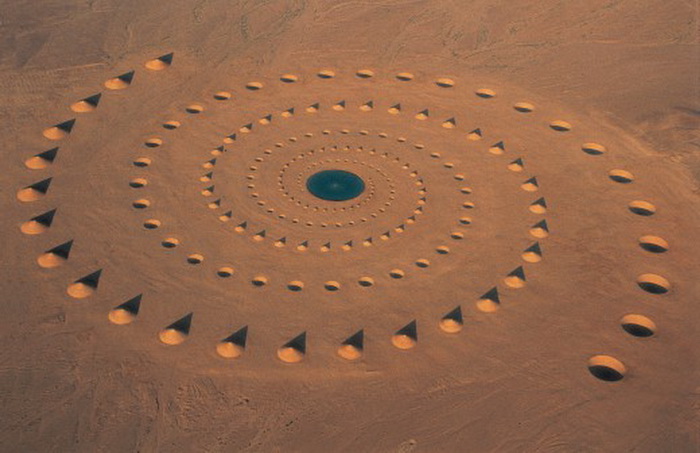 A couple of weeks back, the presenter of a Google program discovered some strange-looking spirals found in the Egyptian desert and began to question whether this design was created by extraterrestrial intelligence. Soon after, curiosity roused and people wanted to take a look at this bizarre creation for themselves.

But what the one million people were actually seeing in the desolate reaches of the Egyptian Sahara desert, just a short distance from the shores of the Red Sea in El Gouna, was in fact an environmental art installation, constructed in March 1997 by a Greek art team. Now, seventeen years after its creation, the project has become viral.

The installation artist Danae Stratou worked with architects Alexandra Stratou and Stella Konstantinidis (D.A.ST. Arteam) to design and build in the heart of the desert, this enormous 100,000 square meter piece of artwork called “Desert Breath,” so as to celebrate “the desert as a state of mind, a landscape of the mind.”

The project featured the displacement of 8,000 cubic meters of sand, constructed as two interlocking spirals, one with vertical cones and the other with conical depressions in the desert floor. Desert Breath was originally designed with a small lake 30 meters in diameter at its center, but recent images show that the lake has emptied.

“Located at the point where the immensity of the sea meets the immensity of the desert, the work functions on two different levels in terms of viewpoint: from above as a visual image, and from the ground, walking the spiral pathway as a physical experience,” say the artists of their installation, which has no political or cult-like aspirations.

Today, seventeen years after its completion, the entire structure is slowly disintegrating as the sand that forms the art piece slowly blows off its cone-shaped hills and fills in its depressions, making it “an instrument to measure the passage of time.”

To see the art installation on Google Maps, click here.