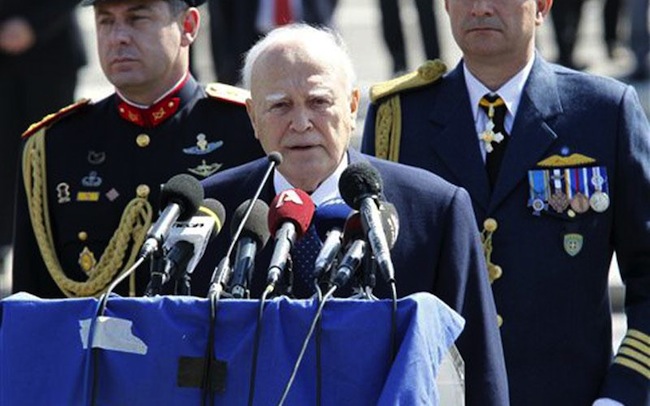 Greece will exit the crisis only if it applies a national reconstruction plan beyond a memorandum’s directives, President of the Hellenic Republic Karolos Papoulias said on Sunday, in his annual message for the celebrations of Greek Independence Day on March 25. “Today we are at a threshold of crossing over the final exit from the crisis, depending on whether a national plan of reconstruction beyond the memorandum and the memorandum’s mentality is implemented,” Papoulias said.
The president also stressed that “fulfilling fundamental targets on a specific timetable is not just an option, it is an obligation before the new generation, which has been greatly wronged by older generations.”
Referring to the struggle for independence from the Ottoman rule that broke out in 1821, Papoulias said “the impossible can become possible through harmony (among us), courage and decisiveness,” very much like the fighters of the time, whose “self-denial and faith in ideal and noble visions always serve as a source of inspiration and lessons on how national trials and tribulations may be overcome.”
“Our country has gone through a lot since then — wars, civil war anguish and bankruptcies. Today we belong amongst the most developed countries in the world and at the core of the European Union, having gone through four hard years because of the economic crisis,” he said, noting that “several of our fellow country people are being tried harshly, the social cohesion has been in jeopardy, and even the quality of our democracy has become opaque.”
Papoulias also said that “our thoughts are also with Cyprus, as 40 years after the Turkish invasion it remains partitioned and our Cypriot brothers are being harshly tried because of the economic crisis.”
(source: ana-mpa)