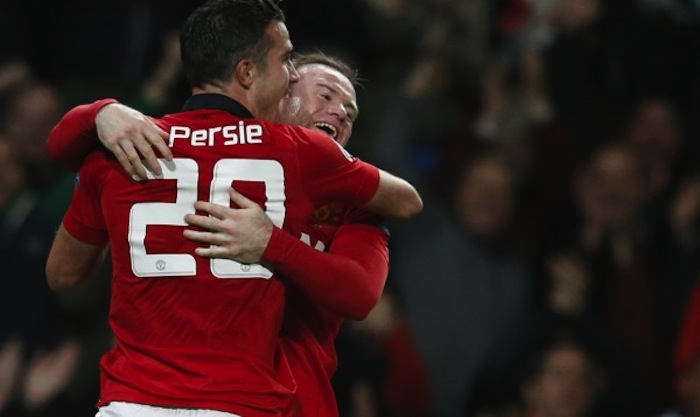 Robin Van Persie scored a clinical hat-trick to secure the 3-0 win Manchester United needed to progress past Olympiakos into the last eight of the Champions League at Old Trafford on Wednesday night.
The two-goal lead taken into the game by the freshly re-crowned Greek champions was eradicated just before half-time as Rooney and RVP linked up well at speed to craft an equaliser, the Dutchman having already scored from the penalty spot after 22 minutes.
The winner came early in the second half, direct from a free kick that Roberto in the Olympiakos goal will be disappointed not to have made any effort to save.
Despite having the lion’s share of possession in the second half, Olympiakos failed to create enough chances to score the vital goal that would have seen them progress on away goals, with United ‘keeper David De Gea twice at his best to deny David Fuster.
Joel Campbell looked threatening for Olympiakos on occasion, especially in combination with Dominguez, but Manchester United’s defence was more organized and resolute than it had been in Athens in the first leg and Olympiakos, despite piling on the pressure for the last 15 minutes, were unable to find a way through.
Manchester United’s Wayne Rooney said: “We had a desire to win, and … we owed ourselves [a result like this] and the fans, the manager, everyone. This a great result and hopefully it can kick start our season.”
Notably for United, who have been struggling for form this season, the victory was orchestrated from central midfield by 40-year-old player-coach Ryan Giggs, who played the entire match (his 140th in the tournament, two short of Raul’s record). Time and again, he offered exquisite service to the front pair of Rooney and Van Persie, enabling the latter to collect his first hat-trick in the Champions League.

The entry of Cyprus for the 2021 Eurovision song contest has sparked wide controversy among ultra-conservative Christian groups on the Mediterranean island.
Food