Government Negotiations with Troika Continue; Hopes for Agreement by Monday 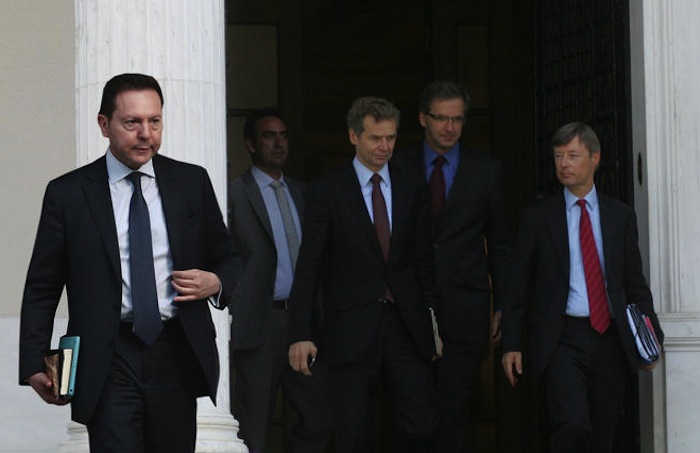 Earlier today, after a six-hour meeting between the Greek Finance Ministry and the heads of the Troika, a Ministry official announced that the banks’ draft law will be tabled immediately in parliament and after nine days Eurobank’s board will be able to convene for the capital increase and the privatization.
The same official also said that “we want a percentage of Eurobank to remain with the State, but the largest part will pass to the private sector.”
The head of the Hellenic Financial Stability Fund, Anastasia Sakellariou, was also present at the meeting, during which the fiscal situation was also discussed. “Huge progress has been made, and on Saturday evening we will know whether we will be able to reach an agreement on Sunday, or on Monday the latest,” said the official.
However, the Ministry will need to have more meetings with the Troika to resolve the large number of issues that still remain open.
Kyriakos Mitsotakis’ meeting with the Troika came to an end after two hours, but no agreement was reached since there was a problem with the negotiations.
The lenders raised the issue of 2015 state employees’ dismissal, a request which the government did not accept. The issue was put on the table at the last minute and was referred to the overall negotiators, that is to say it was referred to a higher level.
The Troika has also scheduled meetings with Greek Labor Minister Yiannis Vroutsis, Greek Environment Minister Yiannis Maniatis and Development Minister Kostis Chatzidakis.
Greece has been urged by the Eurogroup to reach an agreement with the Troika by Sunday, in order to obtain approval for the release of the next loan tranche.