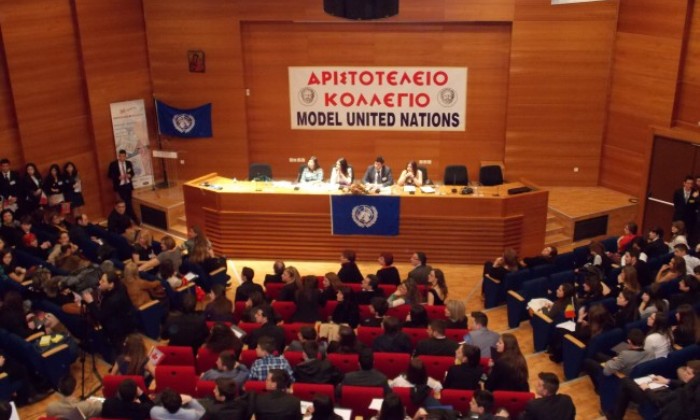 450 students from 32 public and private Greek, Turkish and Italian schools, are participating in the 12th Model United Nations (MUN) which started on Thursday, March 13, in Thessaloniki, Greece, organized by the Aristotelio College.
The three-day conference (March 13-15) is a simulation of UN meetings, where the students are invited to act as diplomats representing various countries.
By organizing the 12th Model United Nations, the Aristotelio College of Thessaloniki  seeks to provide an opportunity for teens to explore and discuss issues of concern to modern society such as the economic recession, environmental pollution, hunger, unemployment, equality, terrorism and education.
Using the power of persuasion and argument, teenagers will be negotiating, expressing opinions and support for them. Through the conference, which is held in English, participants also have the opportunity to approach basic principles in the official language of diplomacy, while the aim is to understand the problems that exist around the world.
“The MUN is one of the most innovative actions which has been included in the Aristotelio College’s program meeting the requirements of our times. The aim is to develop an integrated citizen of tomorrow,” stated the college’s headmaster Christos Gkrozoudis.
At this year’s 12th MUN 409 students from 28 Greek schools are participating, along with 16 students from three Turkish schools and 25 students from an Italian school.