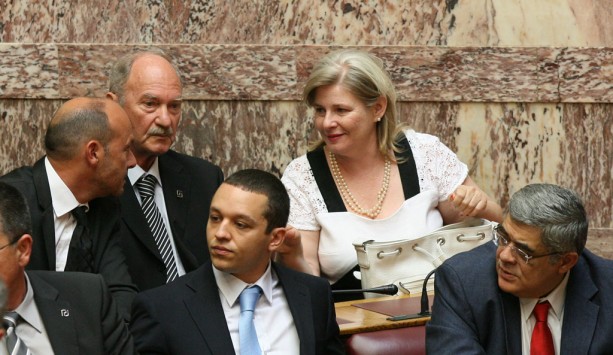 The Ethics Committee of the Greek parliament has decided to lift the parliamentary immunity of another three members of the political party Golden Dawn’s parliamentary representatives, Eleni Zaroulia, Ilias Kasidiaris and Michalis Arvanitis.
The eight MPs of New Democracy, SYRIZA, PASOK, DIMAR and KKE voted in favor of the waiver, the representative of the Independent Greeks voted “present,” while Golden Dawn MP Ilias Panagiotaros voted against the decision.
According to reports, Zaroulia denied all the accusations being brought against her and said that they did not concern her; she mentioned “political expediencies.” The Golden Dawn MP, wife of imprisoned party leader Nikos Michaloliakos, didn’t appear before the committee but sent a written statement, which provoked the members of the committee.
Ilias Kasidiaris, shortly before appearing before the Ethics Committee, mentioned to journalists that his indictment is “fabricated, stale and clearly political.” “It aims solely at my illegal imprisonment before the local elections, so that I won’t be able to talk publicly,” said Kasidiaris, adding “I’m being accused of aggravated possession of two weapons for which I possessed a legal license, as stated in two reports that I am presenting to the committee. Those weapons aren’t subject to the weapons class mentioned in the laws of Greece on aggravated possession of weapons.”
The committee will meet again on Tuesday morning to deliberate on lifting the immunity of the other Golden Dawn MPs.