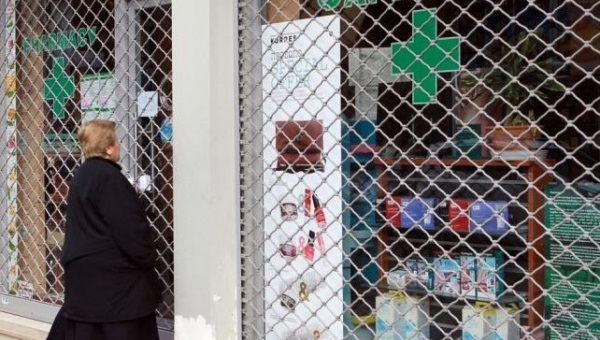 The union of Greek pharmacists is proceeding with  a 48-hours strike on Monday, March 10 and Tuesday, March 11 in protest at government’s plans to liberalize their sector. They have described the strike as a “warning” and threaten further action and the closure of pharmacies across Greece.
The Panhellenic Pharmacists’ Union is protesting against the sale of over-the-counter medicines by supermarkets and the Troika’s plans to  reduce the profit margin in the pharmaceutical sector to 15% which, they say, will force many professionals to close their pharmacies because of high operating costs. The pharmacists are also complaining about the creditors’ plans to open up the sector to competition by changing the rules governing the operation and ownership of pharmacies  as well as the liberalization of opening hours. The union has repeatedly warned that these policies will make small businesses owned by individual pharmacists vulnerable to competition from large pharmacy chains.
Members of the Pharmacists’ Union demonstrated on Monday noon, outside the Greek Parliament, in Syntagma square, central Athens, holding placards that read “Health is a human right”.
During the action, on-duty pharmacies will serve citizens and supply medications to patients.

SpaceX Launchpad Deimos is Named After an Ancient Greek Deity