“The Hush Hush Show,” a comedy show that will debut in Hollywood on Saturday, March 16, is being hosted by two hilarious female comics, one of which is Greek-American.

Jessica Koucouthakis and Mona Shaikh, who have been performing at venues for years, decided to put together a showcase featuring the best comedians on the scene today — including Theo Von and Laurie Kilmartin of TBS and “Conan” — along with some other performers that have been on Comedy Central, “Jimmy Kimmel Live!,” Showtime and HBO. Koucouthakis and Shaikh are producing as well as hosting.

Koucouthakis left Texas for Los Angeles to study at USC, and says she has “always been a performer.” She’s done theatre, plays, improv, was in a girls sketch group and even wrote her own one-woman show at one point.

“It’s weird how I started doing [comedy]…I broke up with my boyfriend and because I lived in the apartment above him, I couldn’t stand to be at home at night watching his new vegan girlfriend come and go; I would start to go out to open mics,” she says, adding, “I’ve done alot of different types of performance art and it’s weird I had fun with all of it, but for me none compare to stand-up. I can’t tell you the distances I have driven to perform stand-up. I love how direct it is and how immediate the feedback is, the relationship I have with the audience.”

Shaikh, a stand-up comic of Pakistani descent from New York City who proclaims she “loves everything Greek!,” got into comedy “by accident.” A stage actor and writer for a long time, she pursued stand-up upon a friend’s insistence, and never looked back. After successfully doing an open mic at Comix Comedy Club in NYC, she’s gone on to perform at the Comedy Store, IceHouse Pasadena, Hollywood Improv and Flappers Comedy Club, to name a few, and will be featured in the upcoming Uncontrolled Comedy for Def Jam Comedy this month. 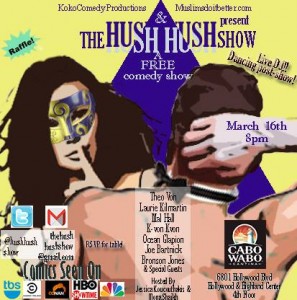 So it was only natural for the two funny ladies to put their talents together for “The Hush Hush Show,” which will play at Cabo Wabo Cantina on Hollywood Blvd. Their goal is to give the audience “non-stop entertainment,” and as Shaikh says, provide a “great night of comedy [with] a live DJ and a great chance to make new friends and single people to mingle.”

And Koucouthakis, in taking it back to her Greek roots, says she loves putting on a show to get the audience to laugh and relate to each other’s behavior.

“Comedians are the modern day cynic — cynic in the Hellenistic Philosophy sense, not the modern day people who always hate everything sense. The cynics back in ancient Greece, like Diogenes, would criticize social behaviors they believed caused suffering, and that’s what comedians do for people,” adding, “the comic reveals people to themselves. And they can laugh about it.”