Young Filmmakers Make Movie to Express Their Love for Greece

Invitia Productions, a Barcelona-based company composed of a group of young filmmakers, is making waves with a film they produced to express their love for Greece.

Produced and written by Marina Muñoz (who also directs) and Iñaki Lamúa, the cast features Lamúa, Katerina Petropoulou, Vasilis Liberis, Stelios Filai and Aris Mouzakis. Having visited Greece many times and seeing the transition that has occurred over the last few years with the economic crisis, the young filmmakers thought it would be a good idea to make a film that could shine a positive light on the country.

Greek Reporter chatted with the film’s producer, writer and star, Iñaki Lamúa, to find out why the filmmakers thought it was important to make “Diafora,” what it was like to shoot on-location in Pyrgos, and what they hope will come of people seeing the film.

Why did you decide to make the film, “Diafora”?
We have been traveling to Greece since 2010. We came for the first time to participate in the Olympia International Film Festival – “Camera Zizanio” was the first project we made when we were 15 years-old. Since that moment, we fell in love with the country, because [of] its culture and its people. That’s the reason why we have been coming every year.

In 2013, we decided to create a short film to show our point of view about Greek society and to thank the support they have been giving to us.

How did you come up with the idea/story for the film?
The story is about a Journalism student from Barcelona who has to do a project for university. He travels to Greece to do a special report. There, he discovers a new world which will change his life.

We wanted to express our concern about the bad image that mass media show about Greece. So, that’s why last summer, we decided to go to Pyrgos with a camera and an idea. There, with the help of our Greek friends from the festival, we recorded the story to be able to explain our feelings about this amazing country. 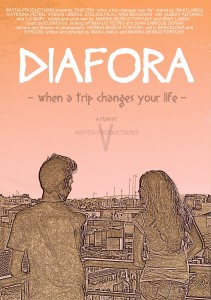 What was the process like making “Diafora”?
First of all, we thought about the script and we started to record the scenes in Barcelona. Then, we went to Pyrgos to record the most important part of the film. After that, we recorded the voice off, which express the thoughts and feelings of the main character, Ramon. Finally, we spent an entire month to edit the film, every day of September, in the morning and in the afternoon. We had to work hard, but we made it with a lot of love and passion, which makes the film special.

How was your experience filming in Pyrgos?
Just an awesome experience. We didn’t have a lot of time, but we enjoyed a lot [of] days with our friends from Pyrgos, they were very kind and received us warmly. The shooting was kind of different. We tried to follow the original idea of the script, but there are some scenes which were not planned. We took the camera everywhere and when we found something that was interesting for the film, we just recorded it, like the bouzouki scene. So in “Diafora,” there are some real moments about our own experience.

RELATED: Bloopers from the making of “Diafora”

What was the premiere in Pyrgos like this past December?
We lived it with a lot of emotion — it’s great to remember that moment. It was screened in the Apollon Theatre, one of the most important places in Pyrgos, as a special mention in the Olympia International Film Festival. It was full of people of all ages, especially youngsters. It’s a film made especially for Greek people, so it was important for us to see that the audience reacted amazingly. We don’t have words to describe that unforgettable night — there were people who thanked us [for] the beautiful image we gave to their town in the film.

What do you hope will come of people seeing the film?
We want “Diafora” to arrive to the whole world, to show everybody that Greece is a wonderful place despite the crisis. The film has been recently screened at MICE International Film Festival in València, and it has been selected to participate in some other festivals during this year.

France Blasts US, Australia Over Ditching of Massive Defense Deal