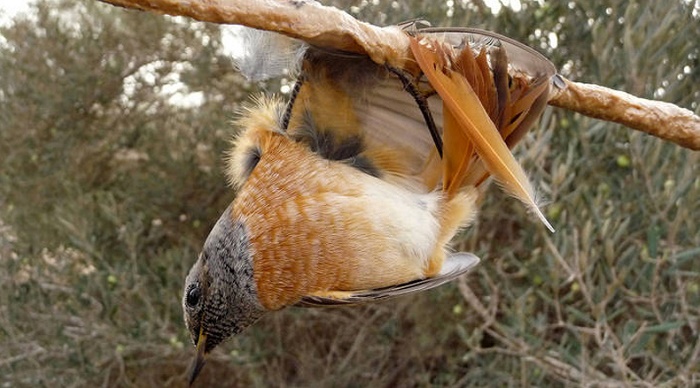 Τhe charges against four environmental activists of the Committee Against Bird Slaughter (CABS) were withdrawn yesterday by the District Court of Famagusta.
Then activists even received compensation of 7,000 euros from the bird trapper who was also ordered to pay a fine of 500 euros for the possession and use of illegal trapping mechanisms (60 limesticks).
The court’s ruling legitimized the actions of CABS and the Foundation for the Protection of Biodiversity (SPA), proclaiming publicly that environmental activism is not a crime.
CABS and SPA invited the Minister of Justice and Public Order of Cyprus, Ionas Nikolaou, to take direct political responsibility for the indulgence in the matter of poaching of birds and targeting of activists. The support of the poacher’s lobby and the violation of the rule of law should finally come to an end.
The complaint was filed on October 1, 2013. Four members of CABS found 60 limesticks in a non- fenced area near the forest Sotiras.
While the activists were gathering the limesticks from the bushes, two men arrived on the scene and attacked the four activists who began to run. The youngest of the men caught up with one of the activists and beat him with a bat. Two CABS members desperately tried to help their colleague and they were also badly beaten.
In the end a member of CABS was seriously injured in the left eye and leg. In addition, the Head of Research Field at CABS, Andrea Rutigliano who caught the incident on camera, sustained injuries to the ear (perforated eardrum) and back.
Despite the fact that the CABS operates in Cyprus, it has been campaigning in different locations worldwide for the protection of birds since 2001. During the spring of 2008 the CABS tour became more frequent in collaboration with the Foundation for the Protection of Biodiversity (SPA).

Unvaccinated Healthcare Workers in Greece to Return to Posts