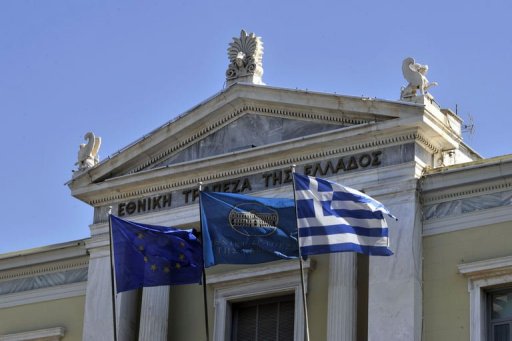 The biggest stumbling block for Greece in its long-stalled negotiations with international lenders is how much more money already-recapitalized state banks are going to need.
That’s hanging up a deal that’s blocking release of a pending nine billion euro ($12.46 billion) installment Greece needs to meet a 10 billion euro ($13.67 billion) bond payment in May, at the same time there will be critical elections for Greek municipalities and the European Parliament.
Greece is hoping for resolution before a March 10 meeting of Eurozone finance chiefs in Brussels who have to give the okay for the loan which is part of the last vestiges of two bailouts of $325 billion from the Troika of the European Union-International Monetary Fund-European Central Bank (EU-IMF-ECB).
Greece says it needs to give the banks only six billion euros ($8.3 billion) while the Troika puts the figure at nine billion euros ($12.46 billion) although the Financial Times had reported it could be as much as 20 billion euros ($27.69) billion.
Greece had already given the banks 41 billion euros ($57.76 billion) because they were brought to the edge of insolvency when a previous government hit investors with 74 percent losses.
Greece wants to separate the banks from other unresolved reforms on a list of 153 that remain undone. “The disagreement between the Troika and Greece on banks should not be the reason not to conclude the review,” a senior Finance Ministry official who declined to be named told Reuters.
“This means that Greek banks will be recapitalized based on the Greek central bank’s [stress test] results. When the European Central Bank’s stress tests come out, and if there is a difference, then additional capital will be provided,” the official added.
Other pending issues include the troika’s demand that rules on mass dismissals change. A planned meeting between the lenders and Labor Minister Yiannis Vroutsis was postponed.
The Troika wants agreement over a midterm budget plan which has to be submitted to Parliament by May and will contain the measures needed to cover next year’s fiscal gap.
The head of the European Stability Mechanism, Klaus Regling, told reporters that some 9 billion euros in bailout funding which Greece is expecting to receive could be released as early as next week. “If there is a positive result of the Troika review and if conditionalities are met, there could be a rapid disbursement of funds to Greece,” he said.
But unless some kind of agreement is reached, even in understanding, Finance Minister Yannis Stournaras will go to Brussels hoping his peers will still okay release of the installment or later in the month.
The additional capital requirements of Greek systemic lenders add up to 6.382 billion euros according to the results of the stress tests that BlackRock Solutions performed on the loan portfolios of National, Alpha, Piraeus, Eurobank, Attica and Panellinia late last year, the Bank of Greece said late on March 6.