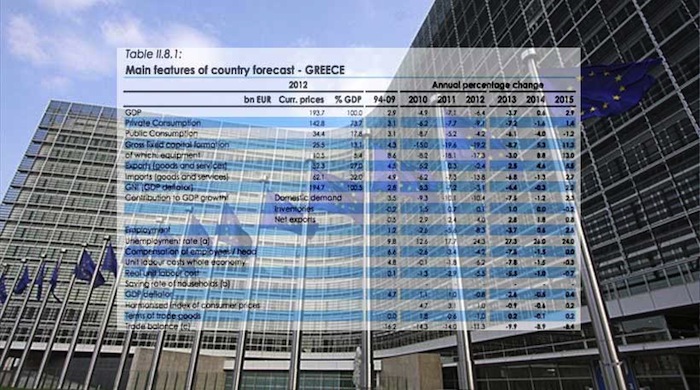 A recent economic forecast, which was published early on Tuesday by the European Commission, shows Greece returning to a growth of 0.6 percent in 2014, with a significant leap of 2.9 percent expected for 2015, after a long and damaging recession.
“Greece has for the first time since 1948 reached a current account surplus,” said Commissioner Olli Rehn,  eurozone’s top economic official, upon disclosing the report.
The Eurozone’s economy is expected to also grow by 1.2 percent in 2014 and by 1.8 percent in 2015.
“The strengthening of the domestic demand this year should help us to achieve more balanced and sustainable growth,” said Rehn, while adding, “The worst of the crisis may now be behind us.”
The wider 28-nation EU, which includes members like Britain and Poland that don’t use the euro, will grow by 1.5 percent this year and 2.0 percent in 2015, according to the Commission forecast.
Even unemployment in Greece is set to improve a little, although the overall picture still remains bleak, with the number of job-seekers falling from 26.4 percent last year to 25.7 percent in 2014 and 24.6 percent in 2015.
That is more than twice as high as the overall forecast for the eurozone, where the unemployment rate is seen as staying flat around the current record high of 12 percent, falling to 11.7 percent only in 2015.
The budget deficit of Greece is expected to shrink from 13.1 percent of GDP in 2013 to 2.1 percent in 2014, while eventually reaching 1 percent in 2015.
Greek public debt, which in 2013 peaked at 177.3 percent of GDP – although the EU ceiling is 60 percent – is set to ease to 177 percent this year and 171.9 percent in 2015.
The Commission expects the eurozone’s overall government debt level to stabilize around 95 percent of GDP before starting to slightly fall from 2015.
Commenting on the forecasts, the Greek Finance Ministry said, “The Winter forecasts confirm the accurate estimates of the government for implementing the 2013 budget.”