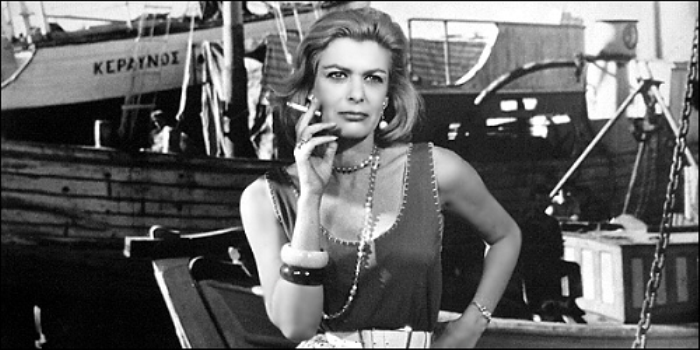 The films that helped the famous Greek actress, singer and first female Minister of Culture of Greece in 1981, Melina Mercouri earn an international reputation, will be exhibited by the Greek Film Archive Foundation from March 6 to 12.
During this event, the Greek Film Archive will project Melina’s movies from the 1960s such as “Never on Sunday” (1960), “Pheadra” (1962) and some lesser known films of hers such as “Gaily, Gaily” and “Rehearsal.”   For the film “Never on Sunday” Melina Mercouri was awarded the Best Actress Award at the 1960 Cannes Film Festival and was nominated for Best Actress in a Leading Role from the Academy and the BAFTA Awards. The event will be held to honor the memory of Melina Mercouri as 20 years since her death have passed.
Among the films that will be projected in Melina Mercouri’s tribute are “He Who Must Die” by Jules Dassin, “The Victors” by Karl Hoffman and “Los Pianos Mecanicos” by Juan Antonio Bardem. The film “Los Pianos Mecanicos” will inaugurate the event.
The event will be realized under the auspices of the President of the European Parliament, Martin Schulz in cooperation with the French Institute of Athens, the Spanish Embassy, The Melina Mercouri Foundation, the Tourism Ministry- Greek National Tourism Organization (EOT), the US embassy and other organizations. The opening ceremony will be organized jointly with the Spanish embassy.
Besides the projection of films, the event will also include two discussions regarding Melina Merkouri’s tenure as Minister of Culture. These discussions will take place at the Greek Film Archive.