Greeks in Romania Excel Over Time 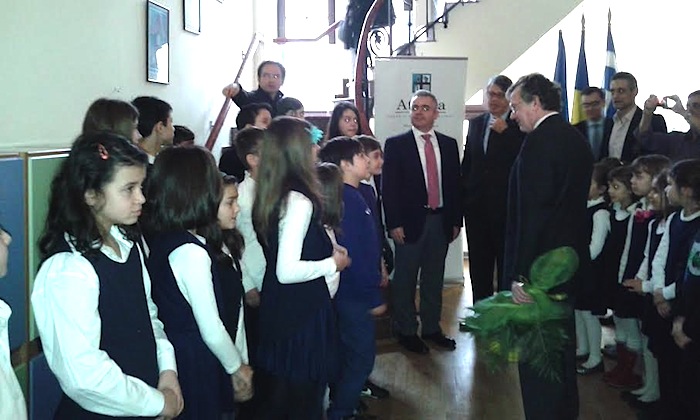 “My visit to Romania was a very important experience for me. I realized with great pleasure that over time Greeks have become distinguished in all areas. Both the Greek expatriates and the Greek businessmen investing in this country make us proud,” noted the Greek Deputy Minister of Foreign Affairs Kyriakos Gerontopoulos after returning to Greece.

Mr. Gerontopoulos had numerous contacts and meetings with Greek expats and entrepreneurs in Constanta and Bucharest who live and work there.

Mr. Gerontopoulos visited the offices of the Greek community in Constanta and met with the presiding committee and its members as well as with Greek entrepreneurs of the city and Greek students who study at the city’s university.

The Deputy Minister accompanied by the Greek ambassador Grigoris Vassilokonstantakis visited the city’s cemetery and deposited flowers at the monument of the fallen Greek soldiers of the 7th Infantry Regiment who died during the Crimean War in 1919. The monument was built by the Greek Community of Constanta.

During his visit to Bucharest, Mr. Gerontopoulos met with members of the Hellenic Union of Romania and with representatives of other Greek communities in the country and was informed of their activities.

A significant moment of the Deputy Minister’s visit to Romania was his visit to the Department of Modern Greek Studies at the University of Bucharest which has been operating since 2001.