DIKO Votes to Quit Coalition over Handling of Cyprus Talks 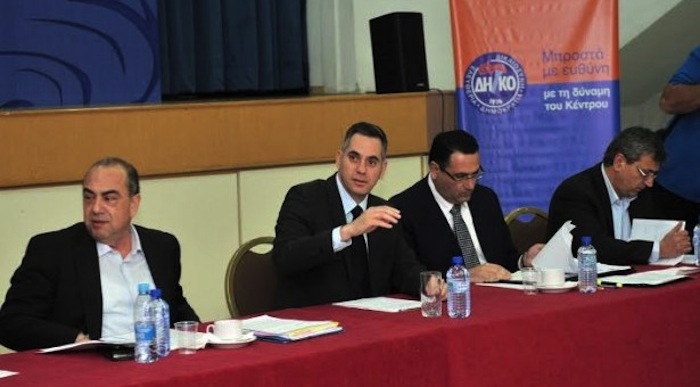 Goverment coalition party DIKO voted to abandon the ruling alliance just after midnight Friday, citing disagreement with the terms for the resumption of negotiations on the Cyprus issue, and accusing President Nicos Anastasiades of violating his pre-election pledges that helped secure the party’s support.
The decision calls for the resignation of DIKO’s four ministers and three heads of semi-governmental organizations by March 4, but the party pledges to maintain a “responsible stance within and outside of Parliament.”
The decision will be brought before the party’s Central Committee on Wednesday for final approval.
In a statement issued after the marathon eight-hour session, DIKO listed the reasons for its decision and cites the party’s “history, principles and duty to the country’s citizens”, as well as “ethical and political imperatives”, as drivers for its decision to withdraw.
The party has 4 ministers in the 11-member cabinet, including the energy and defense portfolios.
Reports suggested that ministers were given until March 4 to resign so that they can collect the bonus they are entitled to when they complete one year in office. That falls on March 1. The reports sparked outrage, with people calling on Anastasiades to reshuffle his cabinet immediately.
DIKO’s Executive Office was convened on Friday afternoon by leader Nicolas Papadopoulos to discuss the latest developments on the Cyprus problem.
Cyprus has been divided since 1974 following a Turkish invasion after a coup led by supporters of the island’s union with Greece.(source: cyprus-mail)