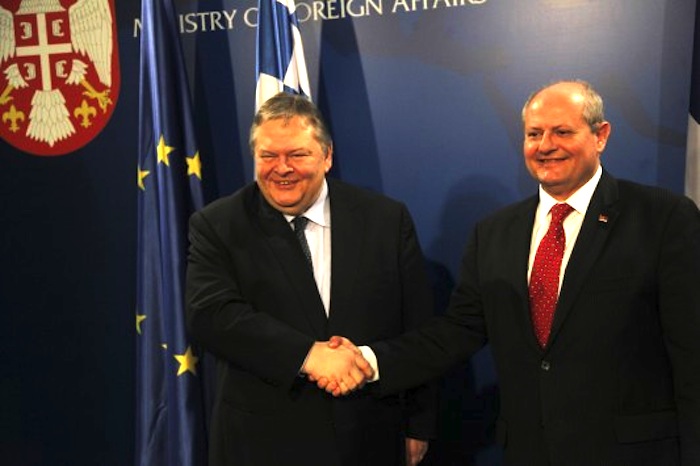 Greece fully supports Serbia’s bid to join the European Union, Greek Deputy Premier and Foreign Minister Evangelos Venizelos told reporters after meeting with Serbian Premier Ivica Dacic on Tuesday.
Speaking in the Serbian capital, Venizelos said that during its six-month rotating EU presidency Athens is committed to making sure Serbia progresses as far as possible in its accession negotiations, which kicked off in Brussels on January 21.
”Greece is ready to provide Serbia with all the support it needs”, said Venizelos.

Negotiations with Serbia are significant to the European integration of the entire West Balkan region, which Greece is very interested in, he added.
Praising Serbia’s progress in its EU-mediated dialogue with Kosovo, Venizelos went on to say that Greece is willing to reinforce its already strong, traditional ties with Belgrade.

Along with Cyprus, Romania, Slovakia and Spain, Greece is one of five EU countries that do not recognize Kosovo’s independence.

Dacic said the ongoing campaign ahead of early elections on March 16 will not slow down Serbia’s European trajectory.
Belgrade is committed to do everything possible to conclude its negotiations with Brussels by 2018 in view of joining the EU in 2020, he said.
Venizelos, who also met with Serbian President Tomislav Nikolic and Foreign Minister Ivan Mrkic, continues his regional tour with visits to Podgorica, Sarajevo, Pristina, Skopje and Tirana.
(source: ANSA)