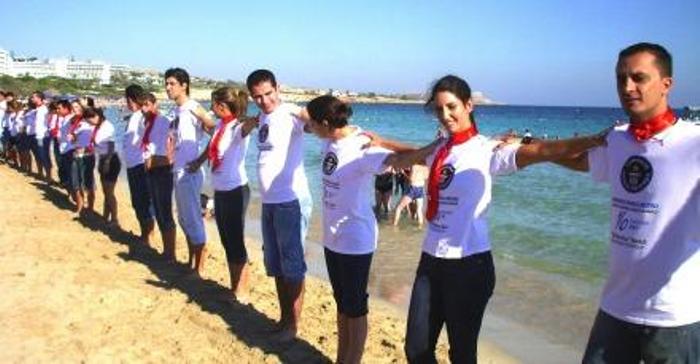 The municipality of Ayia Napa, Cyprus, is determined to make the resort a tourism trademark on a worldwide level. The region’s Mayor, Ioannis Karousos, revealed to the newspaper Fileleutheros, the city’s council decided that in August, Ayia Napa will host the biggest ever sirtaki dance event in an attempt to enter the Guinness book of records. The municipal authorities claim that the purpose of entering the Guinness book of records is the promotion and projection of the Island on a worldwide scale. In addition, this event will assist the authorities in making the name Ayia Napa heard throughout the world.
The municipality’s cultural officer Maria Tofini, said that the initiative aims to restore the “crown” to Ayia Napa for the biggest dancing event featuring the sounds of Mikis Theodorakis “Zorba the Greek,” best known as sirtaki.
Ayia Napa entered the Guinness book of records for the first time in September 2007, after its harbor hosted 268 dancers of all ages, locals and tourists, all dancing sirtaki.
Since then, several cities have attempted to break the record with the number of participants rising steadily. Australia was the last to break the record two years ago when 1607 persons danced the “Zorba the Greek.” About 18 months ago the Volos municipality tried to win back the record for Greece but failed to outnumber the Australians.
According to Maria Tofini, Ayia Napa’s municipality will not disclose any of its plans until the very last minute in order to avoid any possible imitators in the future.
However, she mentioned that a great deal of preparations have already been made. Hundreds of dancers and members of cultural clubs and other associations from the free part of Famagusta have already expressed their enthusiasm to participate the event. Lakis Avraamides, spokesman of the Famagusta Tourism Development Company welcomed the initiative and urged the CTO and other bodies to support it.