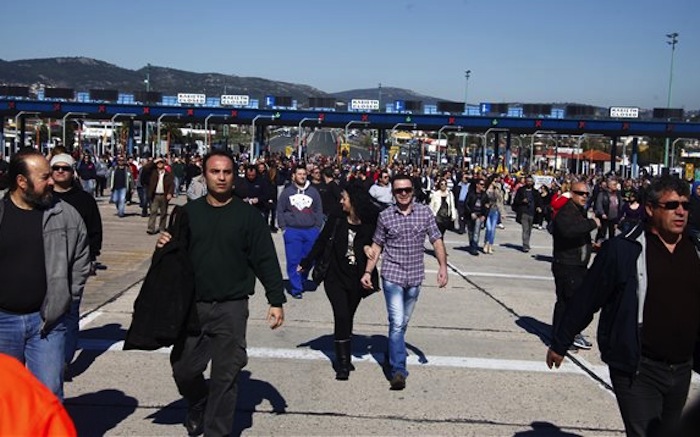 More than 2,000 residents of the areas of Oropos, Kifissia, Tanagra and Kapandriti were gathered on Sunday at the toll booths in Aphidnes, reacting to the increase of toll rates announced by the Greek government.
The police presence caused reactions. Some citizens tried to attack a police car but were stopped by the rest of the protesters. The protesters occupied the toll booths and lifted the bars allowing the drivers to pass without paying.
The Greek Minister of Transport, Mihalis Chryssohoidis reported that the frustration of the citizens is understandable. However, he pointed out that the implementation of this measure is considered necessary.
Last week the Greek government decided to increase the cost of the tolls in all motor-ways, nearly tripling the prices. Greek Transport Minister stated on Friday that the toll increases were part of the contract signed with the motorway operators in 2007.
On February 9, a group of 500 anti-government protestors reacting to government’s decision, set fire to a toll booth on a motorway east of Athens, Greece. The demonstrators  blocked the motorway, set fire to tires and chanted slogans against the Greek government.