Greece and European Union Will Stand By Tunisia 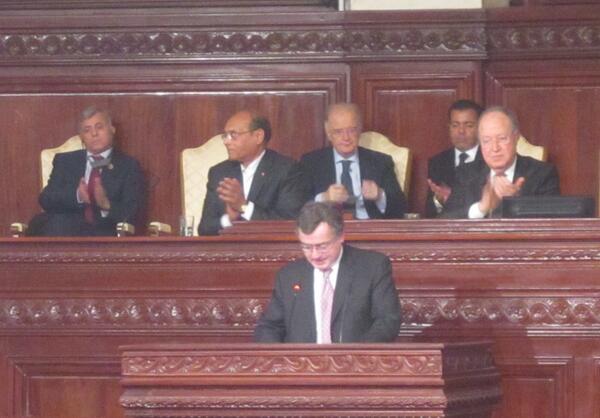 “Tunisia plays an important and stabilizing role in the Arab world and the Mediterranean. I assure you that Greece and the European Union will stand by Tunisia’s side, supporting its efforts,” underlined the Greek Deputy Foreign Minister Kyriakos Gerontopoulos during the official ceremony for the adoption of the new Tunisian Constitution, which took place in Tunis.

In his speech, Mr. Gerontopoulos stressed that “on behalf of the President of the Hellenic Republic, I would like to congratulate the people and political parties of Tunisia on their efforts towards democracy, peace and prosperity.”

In addition, the Greek Deputy Minister said that “Greece welcomes the adoption of the new Constitution and the appointment of the new government. These developments are an important sign of hope for the future of democratic reform in Tunisia.”

The official announcement of the Greek Ministry of Foreign affairs reports that “Mr. Gerontopoulos visited the seat of the Archdiocese of Carthage and North Africa, where he met with His Eminence Metropolitan Alexios. They discussed the missionary work of the Archdiocese and the problems being faced by Christians in the four countries within the Archdiocese’s jurisdiction (Tunisia, Morocco, Algeria, and Mauritania).

Mr. Gerontopoulos also visited the facilities of the Greek Community of Tunisia and met at the offices of the Greek Embassy with the Greeks who are residing and active in Tunisia, noting to them that they can constitute a “bridge” for better Greek-Tunisian cooperation in all sectors, and making special reference to the contribution they can make to promoting the two countries’ economic relations.

Finally, Mr. Gerontopoulos paid tribute to those of the Sacred Band who fell in Tunisia during the Second World War.