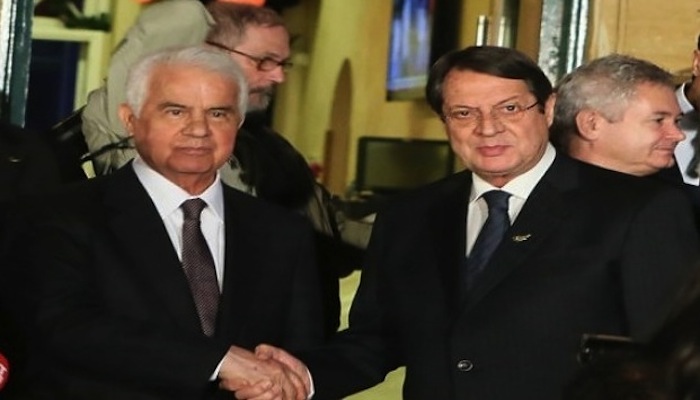 Greek Cypriot leader Nicos Anastasiades and his Turkish Cypriot counterpart Dervis Eroglu were meeting Tuesday to relaunch talks on ending the island’s division after a nearly two-year break.
Leaders of ethnically split Cyprus agreed to work towards a new system of power sharing, in a bid to end a bitter and long-running conflict frustrating Turkey’s hopes of joining the EU and complicating its relations with Greece.
Representatives of the island’s two largest ethnic groups, Greeks and Turks, said they would seek to forge a two-zone federation reuniting the island, which has been split for decades.
“The leaders expressed their determination to resume structured negotiations in a results-oriented manner,” said Lisa Buttenheim, the resident United Nations envoy on the island, reading from a joint statement.
“I want to believe that this day will be the beginning of putting to an end an undesirable and unacceptable situation that has kept the island and our people divided for 40 years,” Anastasiades said.
Addressing the Greek Cypriot parties, some of whom oppose the Joint Declaration, Anastasiades said that while he fully respected different opinions, he was calling for a response to the common desire of all Greek Cypriots to join forces for what is to come. The Joint Declaration was not the final solution but the beginning of a painstaking effort to get to the desired goals, he said.
He said he was sure that love of country and the patriotism of all the political forces would lend themselves to the unity that would be needed to for achieving “the expectations of our people.
Both men were greeted separately by UN Special Representative Lisa Buttenheim who took them inside the Good Offices Mission.
Anastasiades brought a team of six to the talks. It included Chief Negotiator for the Greek Cypriots Andreas Mavroyiannis and the Director of the President’s Diplomatic Office Nicos Christodoulides. Eroglu was also accompanied by six of his top aides, in addition to an interpreter.
Dozens of media outlets, local and international, were present to witness the biggest movement on the Cyprus issue since the last round of talks began in 2008 between former President Demetris Christofias and former Turkish Cypriot leader Mehmet Ali Talat, which ended in failure like so many before them.
Cyprus has been divided since Turkish troops invaded and occupied its northern third in 1974 in response to an Athens-engineered coup aimed at uniting it with Greece.