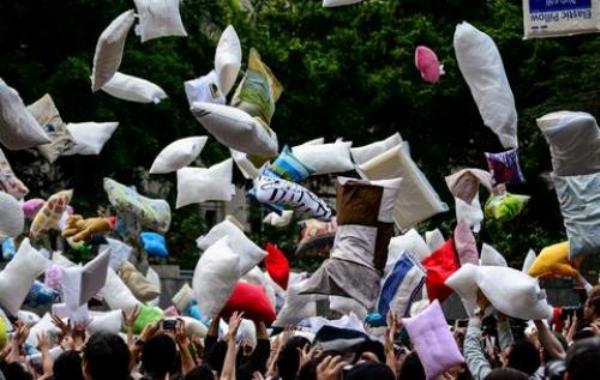 On Saturday March 8, a funky pillow fight will be held at John Charles Sport Center in Leeds, United Kingdom. Besides relaxation, the pillow fight is expected to offer food and warmth to Greek people who really need it. At the same time, it will claim a place in the Guinness Book of World Record.

The event is organized by Greek and Cypriot students and is called “Pillow Fighting For a Good Cause.” Anyone can participate in the pillow fight as long as they bring their pillow and contribute to the overall effort with a minimum monetary donation.

The event is organized by the voluntary group “PoWEr” composed by 21 Greek and Cypriot students of the UK’s universities and consists of more than 120 volunteers from various countries around the world.

The Greek and Cypriot students aim to break the previous Guinness record in pillow fighting which was recorded last year, in August 27 and in which 3,813 people participated. The organizers hope that their event will be attended by 5,000 people.

However, the pillow fighting is not the only event organized by this group. Last year, the “PoWEr” group had organized a football tournament in Leeds and the money raised was given toward the purchase of heating oil for Greek schools.