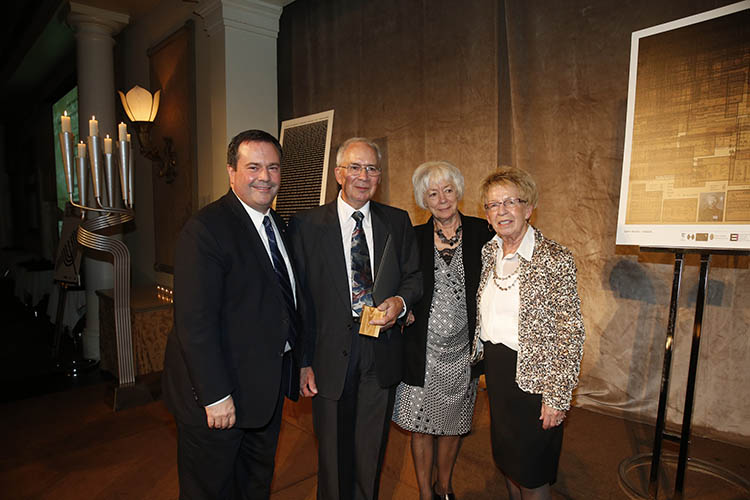 On January 27, 2014 the Greek patriot Angelo Chalikias was awarded in a special ceremony in Montreal’s town hall, with the “Righteous Among the Nations” medal for saving the Jewish-Greek Niso Moustaki during the German occupation of Greece. The ceremony was an initiative of the Jewish institution “Yad Vashem” and the state of Israel.

The commemorative plaque awarded to the late Angelo Chalikias was accepted by his widow Filomena and his two children, Jimmy and Olga. A video with greetings from the Moustaki family in Israel was deeply moving for the audience.

Niso Moustaki was a Jewish-Greek who lived with his family on Corfu. During the German occupation of the island, he escaped from a German detention facility and after many dangerous encounters, and crucially with the help of Angelo Chalikias, he managed to survive and escape to Israel. In 1957, Moustaki began corresponding with the Jewish Community in Ottawa. In one of his letters he wrote that if it had not been for Angelo Chalikias, he would almost certainly have been captured.

These letters were discovered by Chalikias’ family after his death in 2012, and were sent to Yad Vashem, the World Center for Holocaust Research, Education, Documentation and Commemoration. Despite Moustaki’s death, the Yad Vashem’s  “Righteous Among the Nations” medal was awarded posthumously to Angelo Chalikias and was accepted by his family.

A total of 315 Greeks have received the honorary recognition of “Righteous Among the Nations.”