A new Marc opinion poll carried out on behalf of the Greek site, layout.gr, shows that Greece’s major opposition party leads by 2 percent over New Democracy.
The opinion poll places SYRIZA first with 23.3 percent followed in 2nd by New Democracy with 7.8 percent. The Greek neo-Nazi party Golden Dawn, seems to be stable in third position with 7.8 percent. In fourth stands the coalition party PASOK with 5.2 percent along with the Greek Communist Party (KKE). Right behind them follows the Independent Greeks Party (ANEL) with 4.6 percent. DIMAR stands sixth with 4.3 percent and this is the first time after a long period that a poll shows that the Democratic Left could enter the Greek Parliament.
Those partaking in the poll answered that they want to see out the four-year term of the Greek government under Antonis Samaras leadership. Only one out of four (24.6 percent) supports early elections as a solution. 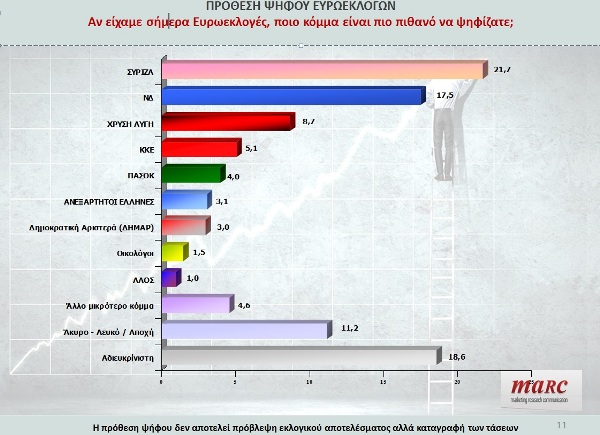 In addition, Marc conducted a poll concerning the forthcoming elections of the European Parliament. The aim is to answer which party citizens will vote for in the upcoming elections.  The major opposition party, SYRIZA, has a clear 4 percent lead over New Democracy. The detailed poll shows that in first comes SYRIZA with 21.7 percent and follows New Democracy with 8.7 percent. Third is Golden Dawn with 7.1 percent and fourth is KKE with 5.1 percent. PASOK stands fifth with 4 percent and sixth is ANEL with 3.1 percent. DIMAR stands at 3 percent.