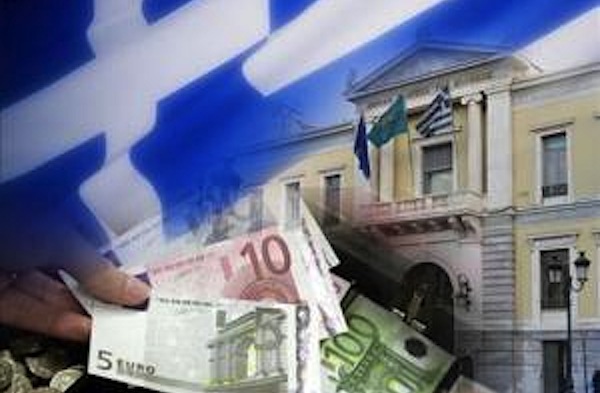 The latest scheme to save the Greek economy include an idea that may include extending the maturity on rescue loans to 50 years and cutting the interest rate on some previous aid by one-half percent, according to two officials with knowledge of discussions being held by European officials.
Αccording to Bloomberg, the plan, which will be considered by policy makers by May or June, may also include a loan for a package worth between 13-15 billion euros, a third bailout which the government has consistently denied it would need because Prime Minister Antonis Samaras said he’s engineering a “success story.”
A previous government in 2011, when current PASOK leader Evangelos Venizelos was finance minister, stiffed investors, including banks and Disaspora bond holders, with 74 percent losses but didn’t make a dent in the still-staggering $430 billion debt.
The government is also reportedly trying to do the same to the its international lenders, the Troika of the European Union-International Monetary Fund-European Central Bank (EU-IMF-ECB) which has put up $325 billion in two bailouts.
“What we can do is to ease debt, which is what we have done before through offering lower interest or extending the maturity of loans,” Dutch Finance Minister Jeroen Dijsselbloem, who heads the Eurozone told broadcaster RTLZ. “Those type of measures are possible but under the agreement that commitments from Greece are met.”
Euro-area officials have mentioned the prospect of cutting interest rates further on the Greek Loan Facility part of the bailouts, “but this conversation is not for now,” EU spokesman Simon O’Connor wrote in an e-mail. He said focus remains on how Greece can meet its current bailout terms.
Samaras’s office declined to comment on the talks for a possible third aid package.
New money would help Greece fill a 2.4 billion euro ($3.24 billion) hole in the 2014 budget which has Troika officials anxious. EU President Herman Van Rompuy said last month that Greece must continue to tighten its belt even as “the people of Greece are still suffering from the consequences of the painful but nevertheless needed reforms that are taking place.” He said they need more.
Under the eased terms, all the bailout-loan repayments would be extended from about 30 years and rates would be cut by 50 basis points on funds from the 80 billion-euro Greek Loan Facility, which was created for Greece’s first bailout in 2010, said the officials, who requested anonymity because talks are still in preliminary stages, Bloomberg said.
The idea, along with a number of other proposals, has previously been floated but gone nowhere. Samaras says Greece will have a primary surplus of as much as one billion euros ($1.37 billion) and is on track to recovery even without the assistance.
The government had hoped it would have some bailout money left over after giving banks 50 billion euros ($67.6 billion) instead of using it for social services and people affected by harsh austerity measures but there’s nothing left. The bailouts run out this year and the banks need still even more money because so many people unable to afford paying their bills have given up on their mortgages, credit cards and loans.
Greece is contesting requirements on how it should stress-test its banks, an exercise taking place before an ECB review later this year, according to two officials.
Germany’s Finance Ministry said this week it’s too soon to begin discussing extra help. The country is putting up the bulk of the rescue loans.
“Currently there’s no rush to decide anything,” Steffen Kampeter, deputy to German Finance Minister Wolfgang Schaeuble, said in an interview in Frankfurt this week.
“We will be presented with all necessary data at the end of April, beginning of May. Only then will we be able to have a clear picture of Greece’s performance.”