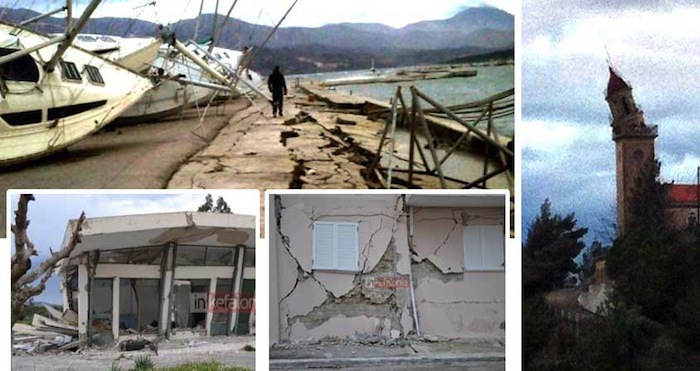 The Greek island of Kefalonia is struggling to heal its wounds after the latest earthquake which struck the island once again early on Monday.
The mayor of Kefalonia said that emergency shelters will be necessary for people who were left without homes. “We will need emergency shelters, many of them,” he said, while mentioning that the majority of the buildings have survived the quake. Other buildings, however, that had been already damaged by last week’s seismic activity, sustained further damages.
“The ministry is ready to provide as many emergency shelters as necessary,” mentioned officials of the ministry of public order.
Professor of Geology Efthimios Lekkas underlined that all structures on the island must be inspected again for damages, especially in the town of Lixouri, which recorded the most violent tremor. According to Lekkas, the morning earthquake with a magnitude of 5.7 ,created deep fissures in the road connecting Argostoli to Lixouri, measuring 50 cm in width and 30 meters in length.
Greece’s Minister of public order and civil protection, Nikos Dendias, as well as secretary-general of civil protection, Patroklos Georgiadis, arrived in Kefalonia at noon in order to coordinate all operations and inspect the situation on the island.
Meanwhile, a state of emergency has been declared in the entire region, which has registered 19 aftershocks since the major quake at 0308 GMT. Within the first hour of the quake, the minister of national defense, Dimitris Avramopoulos initiated the “Defkalion” plan, which enables Greek armed forces and their resources to access the island and aid the efforts.
Helicopters of the Hellenic Air Force have already transported three doctors as well as 11 emergency tents, first-aid supplies and heavy equipment to the island. Another helicopter is scheduled later today in order to transport the chief of the Hellenic national defense general staff, General Michail Kostarakos and Archbishop Ieronymos II to the island. More helicopters are on stand-by, while a navy ship which has already set course to the island is transporting more heavy equipment and mobile relief kitchens.
The NGO’s “Apostoli” and “Allilegii” have already supplied the island with 4.5 tons of food, while 850 blankets, additional food and a large quantity of bottled water are to be air-lifted also.
Most of the damages have been reported for Lixouri, which is still without power or fresh water. In the local hospital a wall collapsed, while the pier at the port sustained severe damage, thus making the mooring of ships almost impossible. The strong winds in the region reaching up to 50mph make the situation even more difficult and create more problems for people who have no shelter.
All schools in Kefalonia will remain closed until at least Wednesday, so as to inspect them for any damages. The minister of education Konstantinos Arvanitopoulos is also expected to visit the island.
The ministry of health will also assist in the relief efforts by sending specialized doctor teams and a movable primary health care unit, as well as a kiln with a 25-liter capacity so as to ensure that sterilized equipment will be available.
“It’s very difficult to make realistic estimates about the upcoming weeks. Unfortunately, the aftershock activity will last long. The new earthquake was part of the same seismic sequence,” said Kostas Papazachos, professor of Seismology at the University of Thessaloniki, Greece.