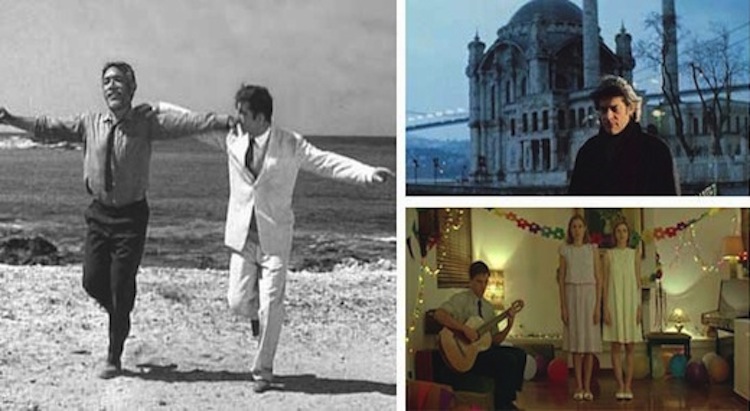 Greek cinema has a longer history than people usually think when they associate the words Greece and cinema. Several Greek films have come a long way and are actually famous outside the country’s borders.
Perhaps the first movie that comes to mind when someone speaks of Greece is none other than the Michael Cacoyannis film “Zorba the Greek.” It is a Greek-American production, which is based on the book by Nikos Kazantzakis “Life and Adventures of Alexis Zorbas.” The film was nominated for several Academy Awards and won three. It was shot on Crete and Mikis Theodorakis wrote the music that later became known as “Sirtaki.”
The unforgettable Melina Mercouri has given Greece many things. One of them was the film in which she starred, “Never on Sunday” that made Greek cinema known worldwide. The movie was filmed in Greece and won an Oscar for its music written by Manos Hadjidakis. The story is about a prostitute, Ilya who lives and works in the port of Pireaus. But Ilya is different to other prostitutes. She always chooses her customers and never works on Sundays or when the Greek Festival is taking place. When she meets the American Homer Thrace her life changes. Homer influenced by Freudian theories and his idealistic image of Greece, makes it his goal to make “a decent woman of her.” The movie was directed by Jules Dassin.
The 2003 film “A Touch of Spice” (or “Politiki Kouzina” in Greek) captivated Greek and international audiences. It presented an unpleasant image of Greeks who lived in Turkey at the time of their persecution. This is an experiential film directed by Tassos Boulmetis. The film’s protagonist Fanis Iakovidis (played by Georges Corraface) is a professor of astrophysics in Athens, waiting for his grandfather, whom he hasn’t seen since he was a boy, to come from Istanbul. He makes all the arrangements, invites his grandfather’s friends over and prepares a huge meal for them. Unfortunately a sudden illness changes their plans and Fanis decides to go to Istanbul to meet his grandfather and relive his memories of when he lived there with his parents. Evanthia Reboutsika made this film shine by creating the musical score. The film deals with a particular historical period and its social implications, shedding light on Greek-Turkish relations and the adjustment problems refugees faced. It shows the bitterness of people who were “persecuted as Greeks and welcomed in Greece as Turks.”
Finally, the most recent movie that riveted international audiences was “Dogtooth” by Giorgos Lanthimos. People either loved it or loved to hate it. It won many awards and was even nominated for an Academy Award in the Foreign Film category. It is a surreal and allegorical movie. The story is about a family with three adult children, two daughters and a son, aged between 20 and 30-years-old. The children are basically living as prisoners inside the family home, because their parents don’t want them to have any contact with the outside world. They are home-schooled through various cassette-tape lessons recorded by their parents, but there is a twist! Sometimes their parents teach them different meanings for certain “dangerous” words, so they grow up thinking that telephone means “salt shaker”, sea is a type of “leather armchair” and road is a “very strong wind.”
These are just some of the great works of Greek cinema. Stay tuned for more!
(Edited by Ioanna Zikakou)