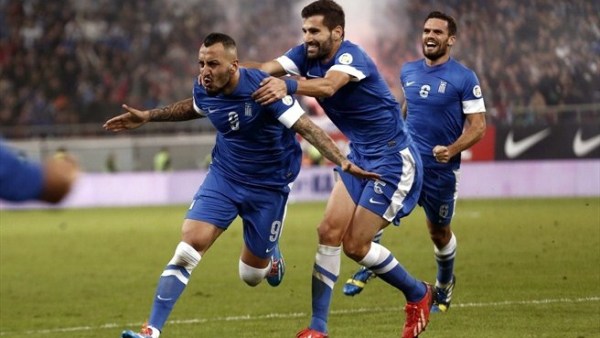 Greek 25-year-old explosive striker, Kostas Mitroglou is one step closer to completing his transfer to the English football club Fulham. The “Cottagers” will sign the Greek hitman for 15 million euros.
Greek champions Olympiacos have reached agreement with Fulham on the terms of the transfer and the official announcement that will seal the deal is only a matter of time. Mitroglou is travelling to London for a medical and to sign a lucrative 4-year deal with a salary of 2.5 million euros per year. The Greek international striker has been in superb form this season, leading the scoring table of the Greek Super league with 14 goals. Moreover,  Mitroglou’s goals have helped Olympiacos to reach the final 16 of the Champions League, where they face Manchester United.
Fulham made a previous 11 million euro bid for Mitroglou, which was turned down by Olympiacos. But the Cottagers were determined to attract the Greek striker to London, so they offered 14 million euros which it was expected that Olympiacos would accept. However they stood their ground and pushed for 15 million. Fulham agreed and this particular transfer thriller it seems will have a happy ending. Mitroglou was left out of the Olympiacos squad for today’s quarter-final match in the Greek cup against Atromitos, in order that he travel to London for his medical and to sign contracts.
Kostas Mitroglou will team up with another Greek international, Giorgos Karagounis. The ex-Panathinaikos player has done his utmost to convince Mitroglou to join him at Fulham. In order to convince Mitroglou to join the club, Fulham have made it clear that he will be a key player and that they wish to build the team around him. Mitroglou is relishing the prospect of participating in top flight football, the English Premier League, and helping Fulham avoid relegation. Mitroglou has recently renewed his contact with Olympiacos but the Greek champions will not keep him in Piraeus against his will as they realize that this is a great opportunity. This will be the most expensive transfer ever for a Greek player participating abroad.
Olympiacos it seems have already found Mitroglou’s replacement. They have been in discussions with the Paraguayan striker Nelson Valdez, who it is hoped can fill Mitroglou’s boots. Not an easy job.

Greece has now surpassed 850,000 Coronavirus vaccinations, while another 50 vaccination centers will be added to the current 750.
Charity